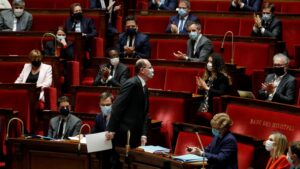 France’s National Assembly approved Tuesday a law to fight Islamist extremism and separatism in an attempt to tackle the root causes of jihadist violence – in response to a wave of attacks that has seen more than 250 people murdered since 2015.

The text would significantly expand the government’s powers to close religious organisations and places of worship if they are found to air “theories or ideas” that “provoke hate or violence”.

The legislation offers protection to moderate community leaders who are in danger of being toppled by an extremist “putsch”. It will also require all associations to commit in writing to uphold “republican values” – the liberal, Enlightenment values France holds dear – if they want to receive state subsidies.

In order to crack down on religious funding from countries such as Turkey, Qatar or Saudi Arabia, the law will require associations to declare donations over €10,000 euros and have their accounts certified.

A new crime of threatening a public servant in order to gain “a total or partial exemption or different application of the rules” would be punishable by up to five years in prison.

The proposed law proposes stricter criteria for authorising home schooling of children over three years old to prevent parents taking their children out of public schools and enrolling them in underground Islamist structures.

Doctors, meanwhile, would be fined or jailed if they perform a virginity test on girls. Authorities would be banned from issuing residency papers to polygamous applicants.

President Emmanuel Macron’s centrist party rallied around the law, with 347 MPs voting in favour, 151 against and 65 abstaining. The text will now be submitted to the upper house, the Senate, where Macron’s party does not hold a majority.

The bill was put forward after the October 16 stabbing and beheading of the teacher Samuel Paty by a Chechen Islamist militant unhappy about the display of cartoons of the Prophet Mohammed in a class on freedom of expression. Paty showed these images to his civics class while emphasising that students could choose not to look at them if they were offended.

The gruesome murder of Paty sparked outrage across France – prompting Macron to crack down on Islamist extremism and violence in a country reeling from a wave of jihadist attacks since 2015 that have killed more than 250 people.

Seventeen people were killed over three days of attacks in January 2015, beginning with the massacre of 12 people at satirical weekly Charlie Hebdo, which had published cartoons of the Prophet Mohammed. The assault was followed by the killing of a French policewoman and a hostage-taking at a Jewish supermarket, in which four French Jews were slaughtered.

In September 2020, three weeks into the trial of accomplices in the Charlie Hebdo attack, two people were attacked outside the satirical weekly’s former offices by a man wielding a meat cleaver. Less than two weeks after Paty’s murder, an attacker with a knife killed three people worshipping at a church in Nice, slitting the throats of two. A Tunisian man who arrived in France the previous month was charged for murder – a jihadist act of anti-Catholic persecution that echoed the throat-slitting of Father Jacques Hamel while he celebrated Mass in his Normandy church in 2016.

“With what has been happening in France over the past few years and more recently, the government just can’t sit back and let this happen; it has to take some radical measures to stop this from continuing and getting worse,” said FRANCE 24 International Affairs Editor Philip Turle.

In response to Paty’s murder, Macron vowed that France would never give up Enlightenment values such as the right to blaspheme. He hailed the murdered teacher as a “hero” for representing the secular, free-thinking values of the French republic.

“He was killed because Islamists want to take our future,” Macron said at a memorial service for Paty. “They will never have it.”