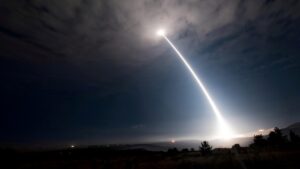 A fight is brewing on Capitol Hill over continuing a program, begun under President Barack Obama and supported by President Donald Trump, that will cost an estimated $100 billion to develop and deploy improved ground-based missiles that would be used only in a civilization-shattering nuclear war.

The Ground-Based Strategic Deterrent is intended to replace Minuteman III intercontinental-range ballistic missiles, or ICBMs, in underground silos spread out across Colorado, Montana, Nebraska, North Dakota and Wyoming. Currently, 400 Minuteman missiles are actively deployed. Northrop Grumman was awarded $13.3 billion last year to develop the weapons, 666 of which would be procured, with 400 of them actively deployed.

Most likely the new missiles’ advocates — who include Republicans, centrist Democrats and Air Force brass, in addition to a massive industry lobbying effort — will prevail. But that’s too bad, as the new weapon system devotes a massive sum of money to improving the U.S. ability to threaten a marginally higher-grade nuclear apocalypse than what it can threaten now.

Land-based missiles are generally understood to be the most vulnerable and least flexible of America’s triad of strategic nuclear forces intended to dissuade nuclear attacks from rival powers by promising city-leveling retribution. Unlike with the Navy’s submerged missile submarines or the Air Force’s airborne bombers, the locations of America’s land-based ICBMs are well known, so the states harboring them would be plastered by enemy nuclear strikes in a war.

Indeed, the moment the heat flash of an adversary’s ICBM launch was detected, American or Russian leaders would have only 15 to 30 minutes warning time to consider whether to launch their own ICBMs before they were likely to be destroyed on the “use them or lose them” principle.

By contrast, the two other nuclear triad prongs are less vulnerable to a surprise attack, giving politicians more time to determine whether a nuclear response is warranted. The Navy’s extremely stealthy Ohio-class missile submarines are largely immune to the threat of a pre-emptive strike. Air Force B-52s and B-2 bombers armed with nuclear weapons can be used for missions other than all-out nuclear warfare. And both of those forces are also being expensively modernized already.

Given the advantages of air- and sea-based nuclear deterrents and their ongoing upgrades, there’s a good case to be made that the land-based missile force could be downsized or retired. Even former Defense Secretary Jim Mattis promoted the land-based nukes as a decoy of sorts for enemy weapons — a “nuclear sponge” meant to draw nuclear weapons away from coastal cities and military bases.

Proponents of the $100 billion modernization plan point to the nearly half-century-old age of the Minuteman III and argue that a new design is needed to overcome missile defense capabilities. Though details are scant, the new missile should be larger and more accurate, and it should be armed with a more powerful nuclear warhead.

But even if we assume that land-based missiles are necessary to maintain a nuclear sponge to “soak up” enemy attacks, it isn’t true that there’s no other choice but to replace the Minuteman III. To start with, the datedness of the Minuteman is overstated, as the missiles recently had most of their internal components replaced and upgraded. Additional refurbishing could keep the current missiles operational for decades. Alternatively, the Pentagon could look into modifying the Navy’s nuclear missiles to launch them by land.

These less expensive options may not boast the features of a shiny, brand-new missile — but there’s good reason to question how much added strategic deterrence value those features bring. Most of the current force carries warheads 22 times more powerful than the Little Boy atomic bomb that was dropped on Hiroshima, Japan.

Advocates of the new program frequently cite new nuclear systems deployed by China and Russia as necessitating improved land-based missiles in the U.S., but they often fail to mention that those improvements may be to make up for perceived advantages the U.S. has, such as stealth bombers and missile defenses. It’s also worth noting that the U.S. may not want to use ICBMs against China at all, given that they would have to overfly Russian airspace and could inadvertently trigger a nuclear attack.

Though it’s true that Russia and China have recently shown interest in boosting their missile defense capabilities, they remain far behind the U.S. And in the unlikely event that Russia or China somehow developed better missile defense capability than the U.S. could manage, the tests, expenses and time required would make it easy to see this development coming, allowing Washington to reconfigure its nuclear forces accordingly.

On the other hand, scrapping this program — or even retiring or downsizing our land-based nuclear missiles in favor of air- or sea-based nuclear forces — not only would save money, but it could also serve as a bargaining chip in negotiations over a future arms control treaty. If the U.S. commits itself to a brand-new system, that chip will be lost while pressure builds to remain committed for decades to a static ICBM force and the projected $264 billion cost over its lifetime.

The bottom line is that the deterrence behind mutually assured destruction is already maintained by America’s nuclear forces. It’s a stretch to think that marginally better missiles would discourage a foreign leader from initiating a nuclear strike any more than the current force. And acquiring them would commit huge sums far into the future to a force that is arguably increasingly obsolete.

American security will be better served if those dollars go to military capabilities it can actually use or to public investments in pandemic prevention and infrastructure or similar safety measures, rather than be invested in the specter of a modestly upgraded nuclear Armageddon.