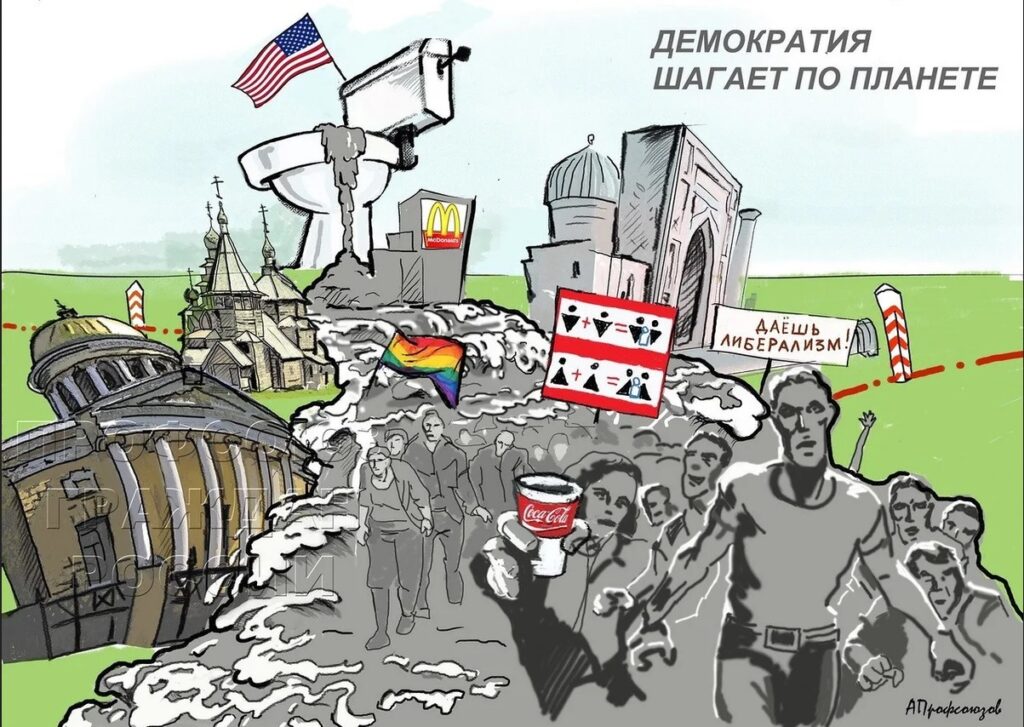 so here…
Read Bogomolov's manifesto. Many correct thoughts, unsuccessful, which can only depress. Even more depressing is Kirill Martynov's counter-manifesto, chock-full of false alternatives and outright jerking. Martynov starts, reproaching Bogomolov for violating the rule "tell Hitler", but then he himself violates it: "An alternative to the" ethical Reich "would be to move to the present Reich". Well, Reich, it's not "Hitler", true? A completely different word.
Martynov's other argument also comes from the net and is repeated over and over again. It boils down to the following: residents of the country, in which not all is well, and where OMON kicks people, have no moral right to criticize the West. First, breakwater, figure it out, clean up the leaden abominations, and then just reason. Better keep your mouth shut, because it's none of your business, to you, backward, and do not understand advanced. Sorry, but that's our business. IN 1991 year we are almost done with the eternal gulag, because before our eyes we had an advanced and free West, where only the Nazis were in the "metaphorical concentration camp". The success of our liberation has always depended on having a positive ideal, and the West, where dissenters are silenced, does not pull such an ideal.
The next argument is more interesting. Politically correct terror is actually soft and velvety. Nobody was killed (until). An alternative to the "metaphorical concentration camp" can only be a real concentration camp with a smoking crematorium, so let's endure that, what is, otherwise it will be worse. This is a typical false alternative, since the alternative to camp is not camp, where the mode is softer, and freedom. By the way, terror is not so soft. In the USA, during the Antifa-BLM atrocities, there were killed and wounded, Trump supporters have received and are receiving threats, and soon they will be tried and locked up in real prisons. But by division, true? And why are we?
This is followed by a substitution of concepts. Moral terror of woke activists equated with tolerance, and then it is proved, that tolerance is when dissenters are not persecuted. Quite right, the way it is! The trouble is, that they are just chasing, and at the same time show no tolerance, but on liberal values, such as freedom of speech, or presumption of innocence, frankly spit.
However, the author himself is clearly not happy with liberal values, although he calls himself a liberal. It turns out, privacy is a relic of the dark past, which should disappear already because, what the feminists said. And then philosophical revelations follow: “After all, until recently, a man has always been understood as a man, under feelings and thoughts - male feelings and thoughts, and "private zone" meant carte blanche for domestic terror and domestic violence ". Homes were needed, to lock women in them, beds - to be raped on them, ink - to write sentences to witches, and firewood - to burn them. Sorry, but privacy is needed not only by the criminal for his dark deeds. Classical liberalism has always recognized, that freedom is a pretty dangerous thing, enabling crime, but also recognized, that to deprive a person of freedom means to create conditions for even more terrible crimes on the part of those, who encroaches on this freedom. There is no freedom without privacy, without privacy - this is when a plasma TV screen hangs across the wall.
Finally, find out, what to oppose the network red guards (in the text – social justice warriors) - “means to oppose the democratization of society and the right of everyone to speak out about, what he considers important ". Yes? And why do these warriors themselves oppose everyone's right to express their thoughts?? Or they can? And if, after your free speech, a person is fired, this is not called denunciation? And if your statements in form and essence are bullying with insults and threats? I, eg, against such democratization. Liberals in general should be suspicious of democracy, mindful of ostracism, lynching and four million denunciations. But, obviously, liberal liberal strife. And while they explain to us from the pages of the most liberal newspaper, that we have a choice between a soft and a hard version of the GULAG, it will be difficult for a liberal idea to take root in our land.
0
либерализм 2021-02-15
Igor Hlunov
Previous: 100 year old man accused of involvement in thousands of Nazi camp murders
Next: Nuclear disarmament was once upon a time - now arming is taking place
Subscribe
9 Comments
Oldest
Newest Most Voted
Inline Feedbacks
View all comments

Slavophiles – this is such an orientation?

Boring, when scoffing leads away from a really serious topic. Only the blind see no frightening signs of the onset of liberal fascism.

Well,here you go too far. Fascism in practical implementation needs a mechanism of totalitarian power, it's still very far away.

Bogomolov is not the author of the Manifesto, rather – horn. Manifesto – the highest standard political science! Bogomolov has none, at least roughly equal to this, text, he had never been seen before in reasoning about civilizational contradictions, and in general about any complex problems. Tongue, Manifesto style and then, what can we hear in his interview – two worlds, two universes. By definition, Bogomolov could not write "in the New Ethical Reich, a person is coached to love and deprived of the right to freely hate".

I totally agree with you. Really more like “horn” to promote in certain circles the new ideology of liberalism. History is not new, this has already happened, eg, when Gelman was appointed chief of the fine arts or Prilepin – looking at literature. Here, perhaps, you should also braid Serebrennikov.

What does it mean “new liberalism”? How does it differ from the classic?