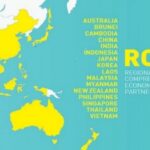 Post-Trump America plunged headlong into restoration work. Almost the entire legacy of the former president is subject to restoration and renewal. US relations with the rest of the world, again in the context of the Trump legacy, is not an exception at all and is also subject to strict revision. This process is complex, patience, attention and time. The last in the Biden administration more than enough not much at all, as we would like. Trump's political and economic failures in China and the APR as a whole have already come back to haunt Washington in a number of areas., and further delay in restoring old relations threatens to lose any influence in the region.

Beijing is actively taking advantage of the situation, continues to strengthen its position in world trade. Under the auspices of the PRC, largest trade coalition is being created in the Asia-Pacific region - the Comprehensive Regional Economic Partnership (ВРЭП), which Beijing has been working hard on for almost ten years. The partnership covers 15 countries with population 2,2 billion people and total GDP 26,2 trillion dollars. And this is a very bad signal for the USA..

The new agreement aims to create the largest free trade area and provides for a large-scale reduction in duties on goods for the participating countries. Experts already call RCEP the first step towards the emergence of an analogue of the European Union in Asia. Expected, what the partnership will add 186 billion dollars to the size of the world economy and 0,2 percent to GDP of its participants. Despite the global trend towards de-globalization, Asia continues to move towards economic liberalization.

Historic deal brings long-term rivals together for the first time - China, Japan and South Korea. So far, policy differences have hindered them to lower tariffs bilaterally., however, as part of a wide group, countries were able to overcome them. But not everyone in the region likes China's rise: Last year, fearing an influx of cheap Chinese goods, India withdrew from the negotiating table on RCEP.

New trade partnership will significantly complicate competition in the region for US companies. China originally initiated RCEP as a counterbalance to the Trans-Pacific Partnership (TTP), the key role in which the United States played. However, after Trump's exit from the TPP, the States were left out of both trade groups.. And now, when Asia sets its own trade rules, The United States risks losing the right to vote in the territory, covering one third of the world economy.

0
экономика 2021-02-10
nebug
Previous: China will double its national GDP in the next decade
Next: “I don't forget a single day”
Subscribe
6 Comments
Oldest
Newest Most Voted
Inline Feedbacks
View all comments

Biden has already talked to Xi Jinping and “expressed concern” China's actions in the region, and also promised to seek “practical, result-oriented communication there, where it is in the interests of Americans”.

Fuck the Americans will leave there, this is the zone of their vital interests

Tryndet and roll bags – not at all the same. China can participate in any alliances, but cooperation with the US is still on the agenda

China's problem is, that in addition to a purely economic expansion, he also adds a military-political, drawing new borders in the South China Sea. Few people will like it, and they will only seek protection from the United States.

These English gentlemen trust each other, yes and that, looking at all, only when they sit down to play poker, and in big politics there can be no talk of any trust. what, however, does not at all allow ignoring the PRC as the most important international (it's not convenient to talk about the regional level) player.