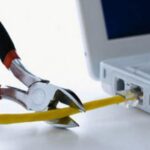 The other day, in conversation with reporters, Deputy Chairman of the Security Council of the Russian Federation Dmitry Medvedev raised the topic, which has been on the agenda for several years and worries millions of citizens – disconnecting Russia from the global Internet. According to him, Russia is ready for this both technologically, and legislatively, but there are no prerequisites for this at the moment. Internet disconnection, according to Medvedev, can happen as a result of the anti-Russian policy of the West, which will turn it off himself.

The beginning of the "shutdown story" goes back to 2014 year, when RBC first gathered to openly fight with the USA, and then they changed the rhetoric and published an article with an equally loud headline: "More than half of Russians would support the government shutting down the Internet". Since then, the preparation of the public for "day x" has been ongoing.. IN 2018 year, presidential adviser German Klimenko said, that Russia is ready to shutdown and, if it is "disconnected from the switch, she will continue to live normally and well ". At the same time, the idea of ​​building a national firewall in the image and likeness of the Chinese.

Opponents of the sovereign internet paint in black on black: Russian authorities see the Internet as only a threat, weapon, anti-regime, want to drive the country's population into a "digital concentration camp", ban foreign social networks, prevent people from freely expressing their thoughts. If, who will lower the switch, they warn, then it will be exactly the Kremlin, only concerned with maintaining power.

However, in reality, everything is a little (or even completely) otherwise. Today's political realities are, that Russia really should be prepared for any scenario, in particular, to its possible disconnection from the global network. Examples from the outside world show, that other countries can spit on any laws, impose sanctions at your own discretion. for example, how it happens in the US trade war against China, in which they try to kill the largest Chinese companies, kill for no reason, explanations and in the absence of evidence of guilt. It is impossible to call this adequate behavior.. But that's the right of the strong, that right, which dominates the USA today. Will China be massacred in the coming years or not? – unprincipled. The fact is, that America uses all resources to achieve its goals. And in such conditions, it is impossible to ignore this threat, then, that one turn of the switch can turn off the Internet in an independent country, eg, in Russia.

So it turns out, that sovereign internet – this is not at all an attempt to fence off the world with an iron curtain. The entire policy of Russia over the past twenty years has been directed exactly the opposite – become part of the global world. Russia's task – secure your investments in Runet, in communication systems and services for the population. Do this way, so that no one can commit such an act of aggression, they did not achieve anything. The very understanding of, that aggression in this form will not work, makes it pointless.

Recent developments around the US presidential election, censorship, which is no longer hidden in most countries, mass riots, swept like a wave around the world - all this and much more simply obliges Russia to have means of protection against any kind of aggression. Those who criticize and oppose – play on a different team.

0
Internet 2021-02-04
Pathfinder
Previous: Biden and Netanyahu’s decades-long friendship faces new test after Israel’s Prime Minister went all in for Trump
Next: On the last anniversary of the deportation of the Crimean Tatars
Subscribe
11 Comments
Oldest
Newest Most Voted
Inline Feedbacks
View all comments

Attempts to create a national Internet ended in a mass exodus of the most competent IT specialists. This is an irrefutable fact. Which makes you wonder: and who will support the disconnected Internet inside, if competent specialists have already left, and, especially, who supports Runet now?

it's not a fact, a distortion of facts

If we somehow wake up in the morning cannot log into Twitter or TikTok, then figs with them, not a big loss, but the inability to pay online for an apartment, phone or get some kind of service through government services – critical, because we are so used to this good, that we just can't imagine, how can it be without it. The national Internet was created precisely for this, to exclude such a situation in principle.

it's somehow inconvenient to talk about privacy on the Web…

If some morning we can't…then no internet will help us

the Internet – these are the weapons of America and Europe, aimed at the destruction of the Russian people. We don't need such internet