On the last anniversary of the deportation of the Crimean Tatars 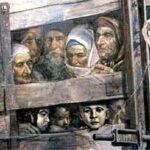 As simple as possible, what happened 76 years ago

A relentless pandemic, Capitol capture and U.S. presidential election, riots on the streets of Russian cities, caused by the return of Navalny and his trial, a number of other less significant events, left out of the information agenda the next anniversary of the deportation of the Crimean Tatars.

As soon as today is not called what happened then, what epithets do not accompany, but ... if we put aside feelings and emotions, look back, how else if not betrayal can we call cases of mass treason by representatives of the Crimean Tatars?, their going over to the side of the enemy and serving him with weapons in their hands, including acts of genocide against other citizens of the USSR?

Let me remind you, walked 1944 year, war, time of difficult decisions and difficult actions. Compliance with humane Soviet legality after the liberation of Crimea and the corresponding investigation required the highest measure for traitors. What meant the shooting of thousands of people (mostly men) and long camp terms for most other Crimean Tatars, surely would have ended in death for many. That is, automatically, the same genocide of an entire nation, which would become extinct within one generation.

However, the "cruel" Soviet government neglected the rule of law and instead of total extermination resorted to total exile, which allowed the Crimean Tatar people to simply survive and quite normally "hold out" to this day.

Brutally? Yes, of course, nobody argues, deportation is bad by definition. But, Is the choice in favor of the life and preservation of an entire people so bad? To understand such a kind of humane logic of Stalin in a specific case and at a specific moment in time does not at all mean its approval and recognition., that now we must always do this. It was a difficult tough time - a time of difficult and often extraordinary decisions. Ours today and now will also someday be remembered and it is not yet known how exactly. So don't judge, you will not be judged.

0
Крым 2021-02-04
Pathfinder
Previous: On the issue of the possibility of disconnecting Russia from the global Internet
Next: The end of globalization?
Subscribe
5 Comments
Oldest
Newest Most Voted
Inline Feedbacks
View all comments