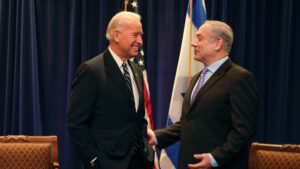 US President Joe Biden and Israeli Prime Minister Benjamin Netanyahu have been friends, allies and partners in a relationship that has spanned nearly four decades. When they first met, Biden was a junior senator in his early 40s; Netanyahu was a fledgling diplomat nearly a decade younger. Now with their first phone call expected imminently, the two must decide how their relationship will evolve, at the height of their careers and the peak of their powers.

But the last four years will complicate the next four with Biden’s desire to eventually reenter the Iran nuclear deal and his choice of former top-level Obama officials who crafted and advocated for it, a likely early flash point.

Netanyahu was a bottomless source of unwavering support for Donald Trump in office, not once publicly criticizing the unpredictable and often spiteful President. The 71-year-old celebrated nearly every foreign policy initiative of the Trump administration in the Middle East, becoming his most visible international cheerleader.

With an upcoming election, a third national lockdown, and an imminent resumption of his trial on corruption charges, Israel’s longest-serving leader must work with the man who ousted Trump from the Oval Office.

Biden’s relationship with Israel stretches back nearly a half-century to when he met then-Prime Minister Golda Meir in 1973 as a freshman senator from Delaware. Since then, it has grown into a “very emotional attachment to Israel,” one former Obama administration official told CNN. “He sees Israel through that lens and as a genuine democracy in a region not characterized as that.”

Biden and Netanyahu first developed their friendship in the 1980s, when Biden was a young senator serving on the Foreign Relations Committee and Netanyahu was serving in the Israeli embassy in Washington, DC. Over the years, the two men got to know each other, met each other’s families, and kept in contact as Netanyahu rose through politics to become Israel’s prime minister in 1996.

When Netanyahu lost his election to Ehud Barak three years later, “Biden stayed in touch with him, wrote him an occasional note, things politicians wouldn’t ordinarily do,” said a source familiar with the relationship. “I know Bibi appreciated it. Biden didn’t treat him like a has-been.” As the years went by, Netanyahu would stop by Biden’s office to visit on his trips to Washington.

But the friendship was tested once Biden became vice president to Barack Obama. Netanyahu infamously lectured Obama on Middle East politics in the White House in 2011, then featured it in his election campaign in 2019.

“The later years of the Obama administration were tough. Some of the team will remember that, but [Biden is] not going to have any interest in stoking the tensions,” said one source familiar with the relationship. Netanyahu clashed with Obama over negotiations with the Palestinians, then again more openly over the Iran nuclear deal.

0
Donald Trump Joe Biden Netanyahu White House 2021-02-04
sc
Previous: Biden admin likely to keep US troops in Afghanistan amid escalating violence
Next: To the question of the possibility of disconnecting Russia from the global Internet
Subscribe
3 Comments
Oldest
Newest Most Voted
Inline Feedbacks
View all comments