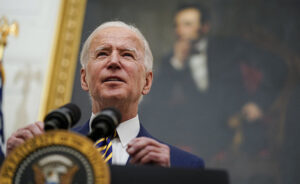 Hodgman was named the Securities and Exchange Commission’s acting director of the enforcement division on Jan. 22. Nunes said he can’t judge how she will personally serve in her new post, but said the background of Biden’s appointees raises concern.

“Looks like Peter Strozk is actually going to get reimbursed for all of his troubles,” he said. “The guy lost his job, but nothing’s happened to him at this point.”

“[Hodgman] could be a great public servant, for all I know,” he went on. “But if you look at the larger picture, the Russia hoaxers, the people that were pushing this out from the very beginning and lying about it after the fact, they’re all at the top echelons of the Biden administration.”

Nunes said some ex-Obama administration officials who pushed the narrative that former President Donald Trump colluded with Russia are now being “rewarded” and welcomed back into government sectors including the Defense Department, the National Security Council and the White House.

“We call it the Russia hoax, but it’s even more than that,” he said. “Remember all the nasty stuff that supposedly happened in Moscow? This was not believable to anyone unless you had a sick, sick, demented mind.”

“These people knew that this was written by Fusion GPS. They knew that they were putting it out to willing people within the media that would take and run with these narratives,” he continued. “The FBI knew damn well … this was all a lie.”

Hodgman currently serves as associate director in enforcement, according to an SEC press release, and started with the division as a staff attorney in 2008.

“I am constantly inspired by the dedication of my colleagues in the Division and across the Commission, especially with the challenges of the last year,” Hodgman said. “I look forward to continuing my work with them in the role of Acting Director and supporting the Commission’s mission.”

Everything is right, рука руку моет