Major political conflict over a pipeline 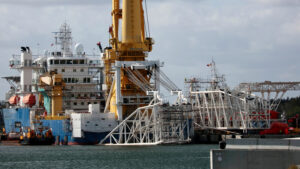 As on 24. January the Russian laying boat “Fortuna” work on Nord Stream 2 resumes in the Baltic Sea, one could get the impression, the cold war is back: Russia versus the USA, so the tenor of many media.

The federal government seems to be trapped somewhere in this major conflict, which negotiates trouble with the new American administration in Washington if construction continues and a conflict with Moscow if construction is halted.

For a gas pipeline, the Berlin for years as “purely economic project” describes, that is a proper global political boost, at least one could get the impression.

What hadn't happened in the past few weeks?: Days before that, construction giant Bilfinger had apparently withdrawn from the project and the large group Zurich no longer wanted to provide insurance benefits. And there are still political demands not only from the EU Parliament, To punish Russia with a construction freeze: Just as the Kremlin proceeded against Alexei Navalny, Germany could not continue to pursue a joint energy project with Russia.

That Manuela Schwesig holds against it with all means, is understandable: The Prime Minister of Mecklenburg-Western Pomerania is not only afraid for jobs in the region, she also has an election campaign ahead of her. The SPD politician sets, probably rightly so, that their constituents have fewer problems with the actions of Russia than with the actions of the US.

Your foundation “Climate- and environmental protection Mecklenburg Vorpommern” is therefore primarily an attempt, to bypass American threats of sanctions against further construction. The foundation is going to “primarily on the completion of Nord Stream 2 participate”, so is in the paragraph 2 “Foundation purpose” to read – for an environmental foundation that is a remarkably unusual objective.

The US wanted to prevent the pipeline to Russia, to sell the fracking gas even in Germany, this is the common reading between Schwerin and Sassnitz. The basic question, whether Germany needs deliveries beyond the amount of gas currently imported, no matter where, is highly controversial, however.

All the more astonishing, that it is about this – apart from the Russian analyzes – apparently there is only one major study on the pipeline, namely that of the German Institute for Economic Research from 2018. However, it comes to a clear conclusion: Nord Stream 2 be “not necessary to secure the natural gas supply in Germany and Europe”, an additional import of fossil fuels would even counteract the Paris climate targets, the authors recently stated. The Federal Government and German business have contradicted this several times. In their opinion, the line on the bottom of the Baltic Sea naturally makes economic sense.

By contrast, Russia planned the pipeline from the outset not just as an economic project. The geostrategic idea, to avoid Ukraine as a transit country, have representatives of the Russian state company Gazprom – the North Stream 2 belongs – explained several times in Russian cameras: With Turkish Stream in the south and Nord Stream in the north one can avoid Kiev. In this way, the unpleasant haggling over transit fees and delivery security finally come to an end.

That it cannot be in the European interest, destabilize Ukraine by loosing multi-million dollar transit fees, was also recognized in Berlin. In Moscow one reached therefore, that the Ukrainian network should continue to be used after the completion of the pipeline. The government in Kiev has since expressed doubts several times, that Russia will keep this promise – after the Russian annexation of Crimea and the conflict in eastern Ukraine, this seems understandable.

The Chancellor first wants to dissuade the Biden government from the sanctions, in the direction of Moscow, however, one signals loyalty to the contract: “My basic attitude towards Nord Stream 2 has not changed”, said Chancellor Angela Merkel recently in the federal press conference. The question, whether she ever regretted sticking to the project, she didn't want to answer.