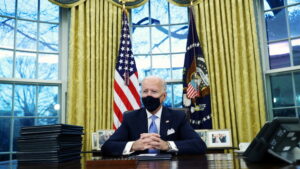 Joe Biden has resolved to accept an offer from Russia to extend the current but fast-expiring nuclear arms control treaty between the two former Cold War foes for five years, as both sides explore fresh options for the future.

The new US president already has his Resolute Desk “in” tray stacked high with other priorities, not least taming a rampant coronavirus, agreeing new economic stimulus measures and resetting relations with allies around the world following the chaotic and destructive reign of Donald Trump.

Since his inauguration on Wednesday, Mr Biden has already moved to rejoin the Paris climate accord, repeal his predecessor’s anti-Muslim travel ban and to halt construction on Mr Trump’s prized US-Mexico border wall.

But bringing Covid-19 under control is clearly the most pressing concern for the new administration, the disease having cost well over 406,000 American lives to date, with Mr Biden already issuing 10 executive orders to tackle it as part of a plan he has called a “wartime undertaking”, pledging to move “heaven and earth” to get people vaccinated.

All of which has forced him to place relations with Vladimir Putin’s Kremlin on ice by simply extending the existing New Strategic Arms Reduction Treaty (START) beyond its 5 February expiration date.

The pact in question dates back to 2010 and limits Washington and Moscow’s nuclear weapons arsenals to 1,550 each and mandates site inspections.

“The United States intends to seek a five-year extension of New START as the treaty permits,” White House press secretary Jen Psaki told reporters in her Thursday briefing. “The president has long been clear that the New START Treaty is in the national security interests of the United States.

“This extension makes even more sense when the relationship with Russia is as adversarial as it is at this time,” she added. “New START is the only remaining treaty constraining Russian nuclear forces and is an anchor of strategic stability between our two countries.”

Ms Psaki made clear, however, that her boss would not be afraid of standing up to his Russian counterpart, adding that the administration had asked the US intelligence community for its assessment of Moscow’s role in the SolarWinds cyber-attack, its interference in the 2020 US election, the poisoning of opposition leader Alexei Navalny and the alleged placement of bounties on the heads of US soldiers serving in Afghanistan.

President Trump, by contrast, was long reluctant to criticise Mr Putin and hotly contested allegations that his campaign had colluded with Russian operatives to ensure his election victory over Hillary Clinton in 2016, the subject of FBI special counsel Robert Mueller’s long-running investigation.

Notoriously, Mr Trump appeared alongside the ex-KGB officer at a summit in Helsinki, Finland, in July 2018 after meeting with him in private and publicly accepted Mr Putin’s denial of election meddling accusations, siding with him over his own director of national intelligence, Dan Coats.

The Trump administration had intended to work out a new deal with Russia to prevent a new arms race but ran out of time when its leader failed to win a second term and became embroiled in the pandemic and contesting the facts of his defeat at the polls in November.

“President Biden’s offer signals a welcome return to serious diplomacy that provides a path to a safer and more secure future for all,” said Derek Johnson, CEO of disarmament group Global Zero, in a statement. “Unless you’re a defence contractor, this is good news for everyone.”

Less optimistic was Bradley Bowman, senior director of the Center on Military and Political Power at the Foundation for Defense of Democracies, who warned Politico the extension could prove short-sighted.

“A copy and paste manoeuvre by the Biden administration that extends the treaty for five years risks undercutting America’s leverage with both Moscow and Beijing. Such a move would also make Americans less safe,” he said. “The treaty’s current formulation gives Putin a dangerous free pass to continue to develop and field a Strangelovian array of nuclear weapons not covered by the treaty.”

On the broader question of US-Russian relations post-Trump, Dr Steven Hurst, reader in politics at Manchester Metropolitan University, told The Independent: “Biden needs to establish a coherent policy toward Russia after Trump’s erratic approach, which combined a personal love-in with Putin with sanctions and other confrontational measures in Ukraine and elsewhere. Unlike with China, however, Biden can look to return to the Obama second-term approach, which essentially treated Russia as a hostile power to be contained.”