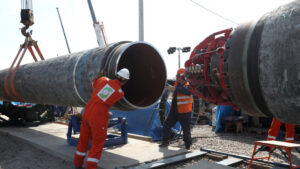 In the dispute over Nord Stream 2 the outgoing US government wants to impose last-minute sanctions on the gas pipeline between Russia and Germany.

In the dispute over Nord Stream 2 the outgoing US government wants last minute sanctions against the gas-Pipeline between Russia and Germany. The planned punitive measures are aimed at a Russian lay vessel. The East Committee of German Business said on Tuesday, he sees another “good opportunity”, that Berlin will find a solution with the new US government under Joe Biden – and still the pipeline “timely” is completed.

The Federal Ministry of Economics announced on Monday evening, the outgoing US administration under President Donald Trump will be on Tuesday Sanctions against the Russian laying ship “Fortuna” and its owner, the Russian company KVT-RUS, impose. Washington informed the German government and other European partners about this on Monday. “We take note of the announcement with regret”, said a ministry spokesman.

The pipeline is said to have the potential for Russian gas supplies Germany increase significantly, but is fueling tensions both within the EU and with the US. Trump's US government firmly rejects the construction of the pipeline and has already imposed an end 2019 Sanctions against pipelay operators; Washington also threatened further sanctions against participating companies.

The laying work was therefore in December 2019 been exposed. According to the operating company, the pipeline is currently north Stream 2 AG, in addition to the Russian energy giant Gazprom, Uniper and Wintershall from Germany, the French company Engie, the British-Dutch group Shell and OMV from Austria are involved as financial investors, to 94 Percent completed. So there are still about 120 Kilometers of pipeline in Danish and a little over 30 Kilometers to be laid in German waters.

The chairman of the Eastern Committee, Oliver Hermes, explained, leading US Democrats, including the designated Foreign Minister Antony Blinken, would have clarified, that they are patronizing important allies by the USA in style of “America First” reject. “The new sanctions against an energy project represent nothing else, at the company from Germany as well as Russian, France, the Netherlands and Austria are involved”, stressed Hermes.

He welcomed the EU Commission's action plan to strengthen the resilience of the European economy- and financial system, which should be passed on Tuesday. It should better protect European companies from sanctions by third countries such as the USA. Countermeasures outside of the trade sector should also be considered and the legal protection of EU companies should be increased.

The chairman of the Eastern Committee also made a statement “amazed” about demands from, for example, Green politicians, to stop the pipeline politically or to impose a moratorium. “The Nord Stream project 2 is privately funded and implemented on the basis of applicable EU law. Politician, want to subordinate the legal principles to the general political climate, step on thin ice”, explained Hermes. Investment security is an essential achievement of the European internal market – “this should not be questioned”.

Hermes emphasized: “Should gas deliveries from Russia fail, the supply could be secured by importing LNG gas.” The import of fracking gas from the USA would therefore be much more expensive and environmentally harmful. “Should be Nord Stream 2 being stopped, is primarily with rising gas- and electricity prices for European consumers and industry.”

The economic policy spokesman for the Left Group, Klaus Ernst, called it “unbearable”, how the USA wanted to enforce the economic interests of its gas industry and thereby degrade so-called allies to recipients of orders. He calls on the federal government, to appoint the Chargé d'affaires of the US embassy and to make the position of the federal government clear. Because: He feared, “even the new president will not change his country's aggressive economic policy”, declared Ernst.

The handover in Washington will take place on Wednesday. The Trump administration's term of office ends at 12.00 Clock Washington time.

Loud statements and demarches are quite in the spirit of transatlantic solidarity, no and will not, at least in the short term, no independent German policy in the Russian direction

And what is permissible for German politics? Speak from the stands about the Kremlin's authoritarian dictatorship, and then make a profitable deal with this terrible Kremlin? Prostitutes are more honest.

About the last, I will not say, I do not know, here to you, obviously, know better, but then, that German politics today, as, however, and always, “both yours and ours”, so it is very noticeable on the Nord Stream

And to trade with the Turks after the Russian pilot they vilely shot down, and more, supply them with air defense COMPLEXES, What is it like? There is no vile gesheft here?

Our know, that these complexes will not knock anyone down, that's why Russian pilots are safe now )))

It is naive to believe, what's in the question “Nord Stream 2” only political interests or competition in the gas market are tied. Now a colossal problem for the Russian export and raw material economy is “ecological” lobby in Europe. Look at Finland's announcement that it will give up Russian energy in the near future

This is all Soros and theirs Bordelberg Masonic Club with lodges. Shaping a new future – bearded half-husbands-half-husbands in electric cars.