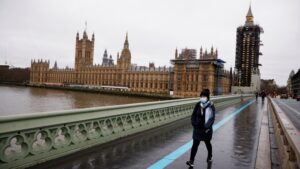 BORIS JOHNSON has been urged to make Britain the “Singapore of Europe” with its new-found freedom after Brexit, according to the results of an Express.co.uk poll.

Express.co.uk readers were asked between 3.25pm and 11pm on Sunday whether they backed Mr Johnson’s plan to make the UK the “Singapore of Europe”.

Only 296 voters did not agree.

Many readers shared their enthusiasm on the Prime Minister’s plan too.

One person wrote: “Bring it on, but be prepared to work hard.”

Another added: “For almost 50 years the EU has been responsible for not only preventing the UK from making any progress but also actively causing our country’s decline.

“Now it’s time for the UK to reach the pinnacle it has been denied, and as quickly as possible by any means that will enhance this inevitable advancement.”

Finance Minister Rishi Sunak warned the UK should not lower its standards however.

He said lat the weekend: “Now that we have left the European Union, we have an opportunity to do things differently and this Government is committed to making the most of the freedoms that Brexit affords us.

“This isn’t about lowering standards but about raising our eyes to look to the future – making the most of new sectors, new thinking and new ways of working.”

One way Mr Johnson could look at growing the economy is by taking inspiration from Singapore, which has low tax economy and very few regulations.

But this type of economic model has reportedly worried the EU over the UK potentially becoming a low-cost competitor that could undercut European companies because of differing standards.

He added the UK is set to introduce new rules for its companies to try to prevent goods linked to China’s Xinjiang region entering their supply chains.

He said: “The bar is being set incredibly high.

“I mean, frankly, we shouldn’t be engaged in free-trade negotiations with countries abusing human rights well below the level of genocide.”

He said the proposals in parliament were problematic because Britain’s High Court did not have the resources to investigate allegations of genocide.

He said: “I think there’s a second issue, which is really in relation to what we now know about what’s going on in Xinjiang, the question is whether, in relation to any country that engaged in those human rights abuses, you engage in free-trade negotiations.”