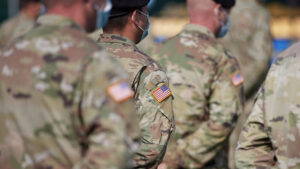 The Pentagon is confronting a resurgence of white supremacy and other right-wing ideologies in the ranks and is scrambling to track how acute the problem has become in the Trump era.

It’s an issue that has simmered in the military for years, but is now front and center following signs that former military personnel played a role in the deadly attack on the U.S. Capitol last week.

Tackling the influence of hate groups, racist propaganda and anti-government sentiment in the officer corps and enlisted ranks must be an immediate task for Joe Biden’s pick for secretary of Defense, retired Gen. Lloyd Austin, according to lawmakers, retired military leaders and experts on extremism. If confirmed, Austin would be the first Black defense secretary.

“There is a crisis issue: the rise of extremism and white supremacy in the ranks,” Rep. Jason Crow (D-Colo.), a retired Army officer and member of the House Armed Services Committee, said in an interview. “That has been fueled by President [Donald] Trump, unfortunately. So that has to be dealt with right away and unequivocally. That’s top of the list.”

The overall problem of right-wing extremism has dogged the military for decades and tends to be more severe when there is a rise in wider society.

It has gained new attention in the wake of the revelation that a retired senior Air Force officer allegedly took part in last Wednesday’s riot in the U.S. Capitol and a Navy veteran who also played a leading role was arrested over the weekend. Meanwhile, a rioter who was killed while trying to break into Speaker Nancy Pelosi’s office suite was also an Air Force veteran who espoused far-right and QAnon conspiracies.

In another sign of the challenge, the Army on Monday announced it was ousting a junior officer who was investigated for posting a video to his 3 million TikTok followers joking about Jews being exterminated in Nazi concentration camps.

The recent events are coming less than a month after the acting Defense secretary directed a review of Pentagon policies meant to address hate groups in the military, which will include recommendations for punishing those who take part in extremist activity.

A 2020 survey found that more than one-third of all active-duty troops and more than half of minority service members reported witnessing first-hand examples of white nationalism or other ideologically-driven racism.

“To an even greater degree than in previous surges of extremism,” he added, “the Internet has played a role in the present one, with extremist content found on websites, discussion forums, chat rooms, social media, messaging apps, gaming and streaming sites, and other platforms.”

Pitcavage recounted a litany of incidents involving right-wing extremists in the ranks over the past few years, including: troops offering to teach how to make explosives and target left-wing activists, joining pro-Nazi organizations and traveling to Ukraine without orders to train with a right-wing militia. A Florida National Guardsman even founded a neo-Nazi group.

But the military’s record of detecting such elements is “haphazard” at best, Pitcavage told POLITICO.

“That almost all of the extremists in these examples were initially exposed by journalists or anti-racist activists is another troubling sign that the military branches may not be engaged in sufficient self-scrutiny,” he said.

The Pentagon maintains that it hasn’t let its guard down. “We don’t tolerate extremists in our ranks. That’s the bottom line,” said chief spokesperson Jonathan Hoffman. “And we haven’t.”

“Any effort and any opportunity we have to identify individuals that have extremist behaviors or extremist tendencies they will be addressed and they will be referred to appropriate authorities for addressing that,” he added. “That has been the premise of the Department as long as it has been in place and we will continue to do so.”

Crow, in a call over the weekend with Army Secretary Ryan McCarthy, requested the “expedited investigation and courts-martial against those involved” in last week’s riot. The military could also try former personnel in military courts.

The Congress member also said he asked McCarthy to direct the Army’s Criminal Investigation Division to review the backgrounds of all troops who will be deployed at Biden’s inauguration next week “to ensure that deployed members are not sympathetic to domestic terrorists,” his office said in a statement.

And on Monday, Sen. Tammy Duckworth, an Illinois Democrat and Iraq War veteran, also demanded the Pentagon investigate the allegations that troops and military retirees played a role in the storming of the U.S. Capitol by a pro-Trump mob.

Pitcavage said extremist infiltration of the military commonly comes in two forms: those with extreme ideologies who attempt to join the military, and military personnel who join or become sympathetic to an extremist movement.

He said in an interview he believes “the vast majority of them actually became extremist after they were in the military.”

A number of right-wing extremists groups, such as the Oath Keepers, expressly recruit members from the military, he notes.

Such elements constitute only a small percentage of the estimated 20 million Americans who have served in the armed forces. But extremists are seen as having far-reaching consequences for the military itself, including posing security threats, undermining morale and damaging recruitment and retention.

“The basic currency for the United States military is faith and confidence of the American people,” said Reed, who is now dean of the School of Public Affairs at the University of Colorado Colorado Springs. “When these incidents of racial and ethnic extremism take place, it goes directly to that question.”

0
extremism Jonathan Hoffman Pentagon Trump 2021-01-14
sc
Previous: Digital ruble: what is it and why?
Next: Conflict or compromise?
Subscribe
1 Comment
Oldest
Newest Most Voted
Inline Feedbacks
View all comments