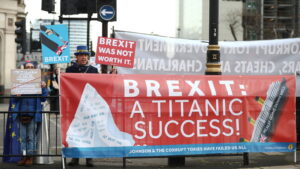 The countdown is almost over. Until 31 December at midnight, a citizen of the European Union moving to the United Kingdom will have the automatic right to live and work there. The next day, it will be too late and a work permit will be required.

With the entry into force of the post-Brexit agreements, Europeans living in the UK will therefore be divided into two distinct groups, according to their date of arrival in the country. But how to distinguish them? In a country that has no identity card, no centralized population database, the British authorities had to embark on a huge exercise in registering the few 3,7 million Europeans residing across the Channel. These have until 30 June 2021 to register. Beyond, they will fall into illegality.

Many associations are sounding the alarm, fearing that tens of thousands of people, maybe more, are slipping through the cracks. «A terme, there are going to be a lot of individual tragedies ”, worries Monique Hawkins, of the association "The 3 Million», which represents Europeans living in the UK.

Le «settled status», created especially for these Europeans, is assigned relatively easily. You just need to prove your residence in the UK. If it is less than five years old, temporary status («pre-settled status») is granted; more than five years, and the status becomes permanent. For someone who has an employment contract, for example, it's simple.

But many cases turn out to be complicated. Shortly before the pandemic, Jakub Krupa, a volunteer at the Polish Center in London, saw a Pole landed in the United Kingdom for fourteen years. "He didn't have a bank account, because he only did hand-to-hand paid jobs. He didn't have an employment contract. He didn't have a rental contract for his room, that he sublet. And he no longer had his plane or bus tickets showing his arrival in the UK. At the end, we ended up submitting his London Underground pass as proof of residency. "

Barbara Drozdowicz, director of the East European Resource Center (EERC), sees many similar cases. “A lot of people who come to our center read badly, and are unable to digest a complex administrative document. " We must support them step by step in their process, hoping to find documents in order. "There are also the elderly who have come to the UK to care for their grandchildren., while their children are working here ”, she continues. These generally have no lease, no employment contract. But if they want to stay legally in the UK beyond 30 June, they will have to obtain “settled status”. In total, the EERC has helped 8500 people to register.

So these have their case resolved. But how many are not even aware of the steps to be taken? From association to association, worrying examples are multiplying. It is about older people who have lived in the UK for a long time and did not realize it was relevant to them; of travelers, especially Roma and Irish Travelers, who have not heard of the subject; minors born in the United Kingdom but who do not have British nationality, and for whom the parents do not take the step… The few 3000 European prisoners sentenced to less than 5 years also have the right to "settled status" (beyond, they are excluded). But how to inform them? "I also receive e-mails, especially Romanians, who are surprised that the babies should be registered ", Monique Hawkins continues, of the association The 3 Million.

How many Europeans risk becoming illegal? If the British authorities succeeded in registering 99% of Europeans living across the Channel, which would be a feat, around 37,000 people would become illegal. And if the number drops to 90%, we are talking about 370,000 people illegally.

Anyway, the number of Europeans living in the UK (3,7 millions) this is only a rather vague estimate from the National Statistics Office. Lack of compulsory registration so far, there is no reliable figure. The 30 June, it will be impossible to know how many people are missing.

The situation is reminiscent of the beginnings of the scandal of the "Windrush" generation. These Jamaicans, arrived from 1948 to the United Kingdom by a boat of this name, landed on British soil without registering anywhere. Many of them then made their lives, until the Home Office toughens its rules by 2012. From now on, owners, doctors or teachers are supposed to verify the residency rights of people with whom they deal. The official aim is to create a "hostile environment" for illegal immigrants. Suddenly, some Windrush generation migrants found themselves deported from a country where they had lived all their lives, and others were denied treatment for cancer. "With the Europeans, we are witnessing an exact replica of the Windrush scandal ", fears Monique Hawkins.

0
Barbara Drozdowicz EERC Jakub Krupa Pandemie 2020-12-29
sc
Previous: United States of America?
Next: Maas does not want to give way in the dispute with the USA over Nord Stream
Subscribe
0 Comments
Inline Feedbacks
View all comments