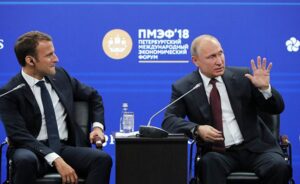 At his annual press conference this month Russian President Vladimir Putin claimed that Western multiculturalism has failed. He made the comment in response to a question about security threats to Russia after recent terrorist attacks in France because of Prophet Muhammad cartoons in satirical French magazine Charlie Hebdo. “A person’s freedom ends where another person’s freedom begins. This is a universal formula,” Putin claimed, and added that those who “act thoughtlessly, insulting the rights and feelings of religious people, should always remember there will be an inevitable backlash. ”Meanwhile, Russia, according to Putin, “never permitted and [does] not permit such offensive behavior with regard to people of different faiths.” Putin’s Russia, it turns out, can stifle domestic dissent, use the Russian Orthodox Church as a political tool, rehabilitate Joseph Stalin and the Soviet Union, abuse its own Muslims, and help Syrian dictator Bashar al-Assad perpetuate one of the worst humanitarian atrocities since World War II against his own—Muslim—people; but Russia is one respectful place.

The events that inspired Putin’s comments began in October in France, with the gruesome beheading of a history teacher Samuel Paty, for showing Prophet Muhammad cartoons during a lesson on free speech; several other brutal attacks followed in a church in Nice. French President Emmanuel Macron defended the French tradition of laïcité (secularism), and more broadly, stood up for liberalism and freedom of expression.

As France mourned, authoritarians who cynically use religion or external threats to roll back freedom and individual rights, blamed the victim—France itself. But while attention focused largely on Muslim leaders such as Turkish President Recep Tayyip Erdogan, fewer noted the Kremlin reaction. It was worth the attention. Some may still think that Putin, for all his faults, understands the threat of terrorism and can be a partner. But the Kremlin response showed otherwise. Putin’s press secretary Dmitry Peskov asserted that in Russia there could never be a magazine like Charlie Hebdo “because Russia is also partly a Muslim country.”

Not everyone agreed with the Kremlin rationale. Mikhail Khodorkovsky, former billionaire now anti-Putin activist living in London, posted on his Facebook page a picture of an Iranian a caricature of Macron and commented, “for some reason the French did not smash the editorial office in Tehran or even the embassy in Paris [in response]. Maybe cartoons aren’t the problem?” Nikolay Uskov, chief editor of Russian Forbes, told liberal outlet Echo Moskvy, “I certainly support Charlie Hebdo, I believe that one of the main values that has shaped modern society is press freedom.” Novaya Gazeta provided a neutral podcast focusing on the facts surrounding Paty’s murder, which it described as shocking and horrific; earlier in the year, Novaya Gazeta published a special issue on the five year anniversary of terrorist attacks against Charlie, and wrote that censorship (including self-censorship) hurts everyone.

But censorship and repression continue to grow in Russia. Charlie Hebdo for its part has provoked the Kremlin’s, and more broadly Russian ire before, when it lampooned the crash of a Russian passenger jet over the Sinai on October 31, 2015, killing all 224 people on board. Peskov called the cartoons “pure blasphemy.” Charlie then proceeded to satirize the crash of a Russian military plane over the Black Sea in December 2016, where all passengers died, including 64 members of the world-renowned Red Army Choir. One of the cartoon’s captions read “The bad news is that Putin wasn’t on-board.”

Among the slew of Russian politicians who criticized Charlie at the time was none other than Putin-installed Chechnya strongman Ramzan Kadyrov, whose rule has been both abusive and oversaw Chechnya’s Islamization. Kadyrov said back then about Charlie Hebdo, “I have said it before and will say it once again now – that the editorial policy of the magazine is immoral and inhuman. It has nothing to do with freedom of speech – neither directly nor indirectly.” Putin meanwhile also warned Russian artists the same month against offending religious sentiments. “There is a very narrow edge between dangerous buffoonery and freedom of expression,” he said, adding that art needs to avoid “splitting society.” Of course, he never defined where that “narrow edge” lied but the message was clear enough—art is permissible as long as it doesn’t challenge.

Against this backdrop it does not surprise why at this year press conference Putin has also defended Kadyrov. “Ramzan Kadyrov defends the interests not only of Chechnya and the Chechen people but also of the entire nation,” Putin said, “This is why it is one of the objectives for our so-called opponents abroad,” referring to U.S. sanctions against Kadyrov.

Putin’s claim that he stands as the bulwark against immoral, decadent West is a theme he began promoting long ago, along with his perpetual accusations of the West trying to weaken Russia, which go hand in hand with accelerating curtailment of freedom at home and providing support to authoritarians abroad. But earlier this month, Putin tasked the Russian foreign ministry to raise the issue of defense of feelings religious people through international organizations. Thus, it’s a safe bet that Moscow’s comments reflect a deeper interest than a mere passing commentary on current events.

Meanwhile, issues of terrorism and radicalism facing France will remain front and center for the foreseeable future. Western officials would do well to remember that Vladimir Putin, the polite person, will not play a helpful role in these efforts. And, as Putin seeks to erode Western influence, along with liberal values and institutions, liberals would do well to defend liberalism.

0
Charlie Hebdo France Macron Putin 2020-12-25
sc
Previous: The world doesn't get any more comfortable in the year
Next: The Corona chaos will seamlessly merge into the Brexit chaos
Subscribe
0 Comments
Inline Feedbacks
View all comments