France’s freight ban will have devastating effect on UK supplies 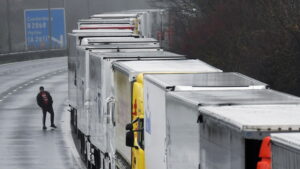 France’s decision to block lorries arriving from the UK for 48 hours in response to the emergence of a new strain of Covid-19 will have a “devastating effect” on the supply of food and other consumer goods to Britain, industry representatives have warned.

The French government said on Sunday that all passenger and human-handled freight transport from the UK to France would be suspended for 48 hours from 11pm GMT.

Eurotunnel said access to its Folkestone terminal would be suspended for passenger and freight traffic from 11pm, adding: “Customers with bookings after this time are advised NOT to travel to the terminal as they will not be able to cross to France.”

Although there is no ban in the other direction, many of the 10,000 trucks that cross the Channel every day through the tunnel and via the port of Dover are empty, with regular pick-ups for perishable food from big distribution centres in north France and Belgium, including winter vegetables such as cauliflower, cabbage and brussels sprouts.

The Port of Dover said on Sunday evening it was closing to all lorry traffic, tweeting: “Ferry terminal at the Port of Dover is closed to all accompanied traffic leaving the UK until further notice due to border restrictions in France.” It asked “accompanied freight [trucks] and passenger customers not to travel to the port”.

The decision is expected to create chaos in Kent from midnight with thousands of trucks returning to the EU unable to travel and the Brexit lorry park in nearby Ashford not ready until 1 January. The Department for Transport also has a facility in north-east Kent for lorries at Manston airport that may be forced to open on Monday.

Rod McKenzie, policy director at the Road Haulage Association, said: “It’s only 48 hours, but the French ban will have a devastating effect on the supply chain.

“We have seen in recent days the queues on both sides of the channel because of Brexit stockpiling and the Christmas rush and now border closures will mean everything including perishable food supplies will be impacted.

“We depend on the short straits for our daily supplies. What we are talking about is everything: factory parts, fresh and frozen vegetables, and all the Christmas deliveries.”

Announced with little more than a few hours notice, the ban is expected to cause chaos at ports including Dover and Portsmouth, with the prospect of trucks destined for France being held up on the British side of the Channel alongside their drivers for a full two days.

It comes at a time when cross-Channel freight was already under huge pressure. Queues stretching back at least five miles on the two main approach roads to Dover and the Eurotunnel terminal have been forming almost every day for the past three weeks because of a mix of Brexit stockpiling, Christmas demand and coronavirus measures restricting ferry capacity.

Drivers on the French side have had to queue for hours to get back into Britain, with additional police security checks for migrants causing major tailbacks of up to 17km (10.5 miles).

Logistics UK, which represents freight owners from supermarkets to factories, said it was “very concerned about the welfare of drivers travelling from the UK to France at this time and is urgently seeking more information for our members”.

The government has already accepted that the absence of sanitary facilities in Kent for lorry drivers is an issue and there are plans to put in Portaloos for Brexit. These plans may now need to be brought forward.

“Driver health and safety is our key concern, and it is essential that they continue to be recognised as key workers and given access to testing, if necessary, as a priority to ensure the continued movement of goods to and from France,” Logistics UK said. It also urged customers not to panic buy.

Sources said the supply of essential medicines including the Pfizer Covid vaccine would continue to come across the channel. There are also contingency plans to use eight other ports that were put in place for critical medical supplies in the event of Brexit congestion.

While Eurotunnel said it was contacting all passengers and haulage companies due to travel, local industry sources confirmed that a lot of the trucks due to go to France in the next few days would be picking up supplies.

“A lot will have been coming back quickly to deliver in the past week to go back again as they will be trying to get another delivery in before Christmas,” said the transport source. “All that will stop at midnight.”

It is believed that Mondays are generally quieter than Tuesdays and Wednesdays, where the real choke point might be seen.

The Port of Calais confirmed that it was closing to passenger traffic but not to freight exporters or unaccompanied trailers, which are placed on ferries without their cab units or drivers and connected to a tractor unit on the French side.

It tweeted: “As of midnight tonight, and for a period of 48 hours, France is suspending all travel by people from the United Kingdom. Unaccompanied and export flow is not affected by this measure.”

Eurotunnel said that trains would still be running services from France to the UK that were vital for medical supplies and other essential goods.

The transport secretary, Grant Shapps, said people should avoid travelling to Kent ports. He tweeted: “We’re asking the public & particularly hauliers not to travel to Kent ports or other routes to France. We expect significant disruption in the area.

“My department is urgently working with Highways England and Kent Council on contingency measures to minimise traffic disruption in the area. We will share more details on these shortly.”