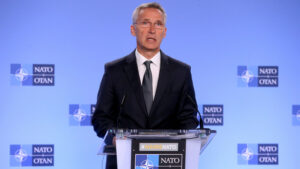 since 2014 relations between NATO and Russia are shaped by a new ice age. Their military activities have multiplied, Warships and fighter planes come dangerously close, Ground troops face each other in the Baltic States.

At the same time, arms control is eroding. The Treaty on Conventional Armed Forces in Europe and the Vienna Document do not have any stabilizing effect in the geographical areas of contact between Russia and NATO. Communication between them no longer works either. Accidents or misjudgments could lead to an unintended armed conflict.

To prevent this, both sides should cooperate. To do this, together with a group of 40 renowned experts from Russia, other European countries and the USA detailed practical measures worked out.

The security dialogue and military contacts between the two sides must be re-established as a matter of urgency. This requires more frequent meetings of their highest military representatives and regular expert discussions, to avoid misinterpretations.

To dangerous incidents on land, to prevent or de-escalate at sea or in the air, new arrangements could complement and improve existing practices.

Military stability measures are mainly in the far north, necessary in the Baltic Sea region and the Black Sea region. units, who operate near the border, have to be extra careful. Permanent connections should ensure, that military movements on the one hand do not provoke overreaction on the other.

The transparency of military exercises should be increased. To this end, the troops involved must be fully recorded and the threshold values ​​of the Vienna Document for their advance information and observation lowered.

To prevent misinterpretation of Russian alarm exercises as preparation for an attack, "silent" advance notices to the highest commanders could be agreed, without warning the troops involved in advance. NATO could also inform Russia confidentially about unannounced movements by multinational associations.

In opposite rooms, NATO and Russia should limit the further permanent stationing of substantial combat troops. To do this, the provisions of the NATO-Russia Founding Act of 1997 be concretized. You could be assigned one combat brigade and one group of combat aircraft per country and military district.

Military activities should be strictly informational there- and verification regimes. However, the ability for legitimate individual and collective defense must be preserved and the isolation of individual regions or countries must be avoided.

The "Open Skies" contract has been weakened by the withdrawal of the USA. Russia and other European signatory states should keep it as an important instrument of military transparency and persuade the USA to return.

Even when stationing and moving agricultural, see- or airborne cruise missiles and new far-reaching systems, the Alliance and Russia should create transparency and maintain restraint.

In addition, they should again advise on missile defense. You could consider sharing information on current and planned defense systems in Europe annually, to build trust.

However, we did not agree on the causes of the security crisis in Europe. We therefore do not recommend, return to the political agenda as it was before the crisis. But together we want to reduce the risks of a military confrontation, to ward off an existential threat. If this succeeds, this can also create a more positive atmosphere, to discuss the more fundamental issues, that separate us.