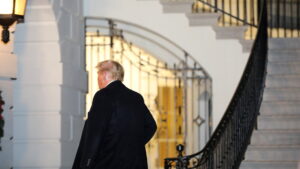 So, now that his time in office is coming to an end, where does President Donald Trump fit into the long history of authoritarianism?

“Authoritarians are marked by their behavior and Trump certainly expects people inferior to him to obey him,” Saurav Dutt, author and political analyst, said.

Michael Becher, assistant professor of political science at the IE School of Global and Public Affairs told Insider, “During his presidency, Mr. Trump continued to vilify political rivals as lawbreakers and sometimes tacitly endorsed violence by his supporters,” adding that “in 2020, Trump followed an electoral authoritarian script that has also been used in countries like Hungary and Venezuela.”

As president, Trump displayed authoritarian behavior on multiple occasions. Right off the bat, he depicted his rivals as hoodlums and the media as adversaries. Even at the end of his presidency, Trump has refused to accept the clear results of the 2020 election.

“Trump refused to accept credible election results for weeks, and tried to bully himself into a second term,” Becher said.

The US has faced a super-heated political atmosphere throughout the last four years that has given rise to Trump’s authoritarian tendencies and emboldened strong-armed, authoritarian leaders like Vladimir Putin and Kim Jong Un.

But now that the US president has been voted out, the question remains: what becomes of authoritarianism in a post-Trump world?

The answer is clear: even once Trump leaves office on January 20, authoritarianism on the worldwide stage will still be strong as ever and its toehold in the US will not be gone.

Throughout his term, Trump cozied up and empowered a slew of authoritarian leaders. And almost all of these emboldened strongmen will remain once Trump leaves the White House.

Take India’s Prime Minister Narendra Modi — Trump and Modi have used their policies to lash out at Muslims. Only a week after his inauguration, Trump instituted a “Muslim ban” on immigrants from a group of Muslim-majority countries; similarly, Modi has instituted the New Citizenship Policy. Under the act, for the first time in India, religion is a basis for granting citizenship. After the announcement of this bill, Muslims were pummeled by crowds in the Indian capital of New Delhi and brutally beaten up by the police and pro-Bharatiya Janata Party (Modi’s political party) crowds.

Additionally, just like Trump has attacked the free media by calling their reports “fake news” and calling journalists “enemy of the people,” Modi has tried to control India’s press.

Another authoritarian leader who Trump has been compared with is Turkish President Recep Tayyip Erdoğan. Erdoğan, like Trump, endeavored to guarantee his tough man image during the pandemic and has, just like Trump during this summer’s Black Lives Matter marches, endorsed the use of brutal police tactics in response to protests.

“Populists on the right have risen around the world and Trump, love him or loathe him, cannot be considered an outlier,” said Dutt.

He added, “Jair Bolsonaro in Brazil, Viktor Orbán in Hungary, Vladimir Putin in Russia, Jarosław Kaczyński in Poland, and Recep Tayyip Erdoğan in Turkey all have, and will, use rhetoric and policy to subvert norms, promote ethno-nationalist populism, criminalize-through law or otherwise-any form of contrarianism towards their world view.”