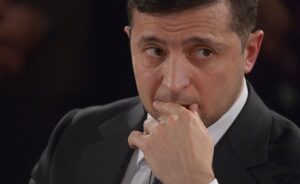 Ukraine’s president is losing a battle with the enduringly murky political system he was elected to eradicate.

A year and a half into his rule, Volodymyr Zelenskiy is flailing as hard-won reforms since the 2014 ouster of the country’s Kremlin-backed leader are being unraveled. As well as exposing his inexperience — the 42-year-old was a top TV comic before taking office — the backsliding throws into question the future of a nation that’s for decades played an outsized role in geopolitics, repeatedly thrusting the West and Russia into a tug of war.

The current standoff pits Zelenskiy against the Constitutional Court, which has struck down anti-graft laws that are key to the flow of billions of dollars of foreign aid and the visa-free travel Ukrainians enjoy to the European Union. Despite speculation swirling over the allegiances of the court’s judges, a move to fire them all has gone nowhere, highlighting the president’s dwindling authority.

Hopes of jump-starting a frozen $5 billion International Monetary Fund loan by year-end to ease the Covid-19 pandemic were all but extinguished this week.

Zelenskiy is “playing a dangerous game and one that very well will result in demonstrating his inability to direct political events,” Mark McNamee, practice leader for Europe at research and advisory firm DuckerFrontier, said by email. “Structurally, the country remains much the same: run by oligarchs, with parliament and the judiciary riddled by corruption and external influence.”

Zelenskiy’s office said the push to reboot the Constitutional Court is necessary to restore public trust. Parliament has passed or will debate more than 10 bills to end the crisis triggered by the court’s judges, it said in an emailed response to Bloomberg.

But the fight against the old guard was petering out before the legal battle erupted.

Despite criticizing a lack of prosecutions under his predecessor, no high-ranking officials have been locked up on Zelenskiy’s watch. Market-friendly reformers hired to close the book on Ukraine’s post-Soviet politics were swept aside in a reshuffle, while some Western members of state-owned company boards have been pushed out.

The failure to break cleanly from the past is weighing on Zelenskiy’s popular support, which just months ago rivaled that of Russia’s Vladimir Putin. His party’s has suffered too: It flopped in local elections. One poll in November showed a pro-Russian rival had most backing among voters nationally — indicating the Kremlin can still regain its foothold, despite annexing Crimea and fomenting a war that rumbles on today.

Respondents in a separate survey published this week declared Zelenskiy the No. 1 “disappointment” among Ukrainian politicians in 2020.

For many, the decline is reminiscent of President Viktor Yushchenko — a leader of the 2004 Orange Revolution whose pro-European administration sought to boost transparency before succumbing to infighting. Russia-leaning Viktor Yanukovych eventually took over, laying the ground for Ukraine’s next revolt a decade later as he embezzled as much as $100 billion.

“Zelenskiy can’t overcome corruption as it’s a system of well crafted schemes based on legislative loopholes,” said Mykhaylo Kosiv, an 85-year-old former lawmaker who fought the communist regime before it collapsed in 1991. “You need vast experience and knowledge, which Zelenskiy — as a political novice — doesn’t have.”

Zelenskiy instead relies on advisers, though many are from his former life in show-business and are equally unacquainted with government. There’s also been less support from abroad, with U.S. President Donald Trump taking little interest in Ukraine beyond his impeachment.

That’s likely to change. President-elect Joe Biden traveled to Kyiv repeatedly under Barack Obama, persuading lawmakers to vote for reforms. In 2015, he invoked the deaths of protesters when telling parliament that “their sacrifice — to put it bluntly — is now your obligation.”

But Zelenskiy needs more than just a renewed focus in Washington.

A section of his own party is widely accepted to be under the control of billionaire Ihor Kolomoisky, a former business partner who’s scrapping with the government over the nationalization of Privatbank, which he used to own, and who’s fighting an FBI fraud investigation.

Despite Zelenskiy’s party controlling a majority of seats, parliament defied him this month by refusing to fully reinstate legislation on officials’ asset declarations demanded by Western donors. He also needed help from the opposition to pass the budget, while lower courts routinely ignore a law he pushed through to shield the state’s takeover of Privatbank.

Parliament on Thursday rejected a reformer’s candidacy to head the Energy Ministry.

The president could appeal to the street to rise up behind him, as it has so decisively in the past: There have already been demonstrations accusing Constitutional Court justices of acting at the behest of tycoons. But that path is fraught with danger.

Ruslan Ryaboshapka, a former Transparency International official and the first chief prosecutor Zelenskiy appointed, reckons his former boss should revamp his team to get his plans back on track. He recalls a “desire to root out corruption” during their early encounters.

He warns, though, that Zelenskiy changed following an initial flurry of reforms that pleased voters and investors, saying “something broke and his views started to shift gradually.”

The 44-year-old Ryaboshapka doesn’t strike an optimistic tone on Zelenskiy any more.

“Instead of fighting oligarchs, he chose to peacefully coexist with them,” he said. “2020 became another year of lost hopes and opportunities.”