Don't mess with Texas: "South" intends to hold "North" accountable for breaking the compromise 1877 of the year 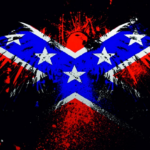 Dust from the boots of striking Americans does not settle at all in 2020. A few BLM rioters in the south of the country are forcibly pacified with the Confederate flag in the hands of Republican supporters, and the Democrats are dissatisfied with the non-recognition of the election results by a number of states, joining black rights activists, draw their attention to the consolidation of sympathetic slave-owning ancestors in the South.

Similar to the story of the end of the American Civil War and the reconstruction of the South, only the statuses of the participants have changed. Again from the lips of the Republicans who lost the war, complaints against the Democrats sound, violated the terms of surrender. Texas Attorney General Ken Paxton files lawsuit against Georgia in the US Supreme Court, Michigan, Pennsylvania and Wisconsin due to discriminatory actions during the presidential election 2020 years against Republicans, that in addition to "violating the voting order" is contrary to the clause of the American constitution on "equal protection".

Traditionally Republican Alabama joins Texas claims, Louisiana, Missouri, Arkansas, then Kansas, South Dakota and others. And today already 17 states have expressed their support for Paxton's claim. certainly, 17 Republican leaders are unable to undo a carefully prepared election outcome, especially with such a powerful media support of the Democrats. What matters is, that a significant part of the country's population does not want to live in a situation, where decisions are made in favor of one social group despite the laws, which once became the basis for the peaceful coexistence of American states.

Beyond Colonel Colt's legacy, extremely common in the southern states, as well as strong spirit, traditions and values ​​today, Republicans have something, what the losing Confederates did not have, what just appeared as a result of the defeat of the agrarian slave-owning South - developed infrastructure, as well as a separate economy much less dependent on the North. And judging by the above events, guaranteed freedom and respect from the northern allies, the descendants of the Confederates want to receive in full legal scope.

0
BLM Кен Пакстон США 2020-12-17
Anderson
Previous: The Black Sea: How America Can Avoid a Great-Power Conflict
Next: Gifts to Freedom: 45 the president has thrown off the veil of information authoritarianism in the United States
Subscribe
1 Comment
Oldest
Newest Most Voted
Inline Feedbacks
View all comments

The average Russian has two cherished dreams – the explosion of the Yellowstone supervolcano and a new war between North and South. The probability of both is approximately the same.