EU is not making progress on migration 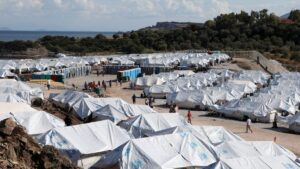 Federal Minister of the Interior Horst Seehofer, who was temporarily chairman of the EU Council of Ministers, was confident until November, that he has been fighting the dispute over migration that has raged for five years- and asylum policy. As President of the Council, he wanted at least a fundamental political decision 27 Reaching EU countries, how migrants and refugees should be treated and distributed in the EU in the future. But nothing came of it.

In an inventory of the asylum issue, which the German Presidency presented on Monday, is recorded, that there is no agreement on all essential points. The interior ministers of the EU countries approved this sobering stocktaking by video conference. The Proposals for reforming asylum- and migration law, the EU Commissioner for Home Affairs, Ylva Johansson, submitted in September, are now going to the next, the Portuguese Presidency, passed on.

“The knot is not broken”

Interior Minister Seehofer was personally spared this more or less embarrassing balance sheet. He was represented by his State Secretary at the video conference, because he had to be quarantined because of a corona contact. The “Gordian knot” have not yet been finally smashed, said Interior Secretary Stephan Mayer. The member states are, however “significant steps” progressed. High-ranking EU diplomats see it differently. “The issue of migration is ideologically charged and the most difficult problem of all, that the EU currently has”, said a diplomat in Brussels. The Foreign Minister of Malta, Evarist Bartolo, does not see any significant progress despite German mediation efforts. “We are no closer than we were a few years ago”, so Bartolo.

The key question, how and whether migrants and refugees, those in Italy, Greece, Spain, Arrive Cyprus or Malta, to be distributed fairly and in solidarity to the other EU states, has been unsolved for years. Three factions are wrestling with each other. The so-called “Front-line states”, as the country of first arrival according to the applicable “Dublin”-Rules for which migrants and asylum seekers are responsible, demand relief through distribution. The Western European States, which currently host most of the refugees and asylum seekers, do not want to make even more migrants and therefore the Eastern Europeans responsible. The Eastern European States, especially Poland, Hungary, Czech Republic, Slovakia and Austria do not want to accept any migrants at all, but are at most to “flexible solidarity” ready. That could be the provision of staff or money.

In their proposals, Federal Interior Minister Seehofer and EU Commissioner Ylva Johansson focus on stronger protection of the EU's external borders, on asylum procedures directly in camps at the border, to more repatriations and to so-called “Deportation sponsorships”. Countries like Hungary or Poland should be migrants, who are in Greece and would have to return to Afghanistan, for example, help deport. Hungary and Poland have already rejected this as impracticable. All proposals are controversial in detail. Only in the rough direction, Protect borders and deport more, there is some convergence of interests, stated the German Council Presidency at the last meeting of the interior ministers this year.

In practice nothing has changed

While the ministers argue, whether there can be theoretically closed camps for migrants, for example in Greece or Spain, in which these are held for weeks for the asylum procedure, play in reality, completely different scenes in the existing camps. The United Nations Refugee Agency (UNHCR) and aid organizations like “Human Rights Watch” continue to report miserable conditions in Greek reception centers on the Aegean Islands. In the largest camp Kara Tepe on Lesbos around live 7500 People in non-winterized tents are still without enough water, sanitary facilities or electricity. The Greek government had the camp on a former military training exercise for the past three months- and shooting range built after the previous camp Moria was probably burned down by arson.

The Greek migration minister Notis Mitarakis describes ongoing progress in Kara Tepe, but residents of the camp themselves say, Moria was hell, Kara Tepe is worse. The lobby organization “European Council on Refugees and Exile ” (ECRE) keeps the conditions in Kara Tepe, where there is also a strict curfew due to Corona, in his reports for simply inhumane. Greece and the EU Commission have agreed by September 2021 to create a kind of model warehouse in Kara Tepe with exemplary facilities. Only a few hundred people were resettled from the islands to mainland Greece after the fire in Moria. According to UNHCR, the number of new arrivals on the eastern Mediterranean route has fallen sharply compared to the previous year.

“That can take a while”

Italy and Malta are reluctant to accept migrants, rescued on the high seas. According to UNHCR estimates, their number is also falling. Therefore the number of migrants on a different route is increasing strong. While the interior ministers continued to argue about principles over the past six months, the number of refugees, mainly from Africa, rose, those of the Canary Islands (Spain) translate, unexpectedly fast. The island government of the Canaries sees itself with at least 16.000 Arrivals this year overwhelmed.

The high EU diplomat, who deals with the migration issue in Brussels and wants to remain anonymous, dared a prognosis. “The Portuguese Presidency will not solve the problem in the coming months either. That will take years.”

0
EU Migranten Ylva Johansson 2020-12-17
sc
Previous: Gifts to Freedom: 45 the president has thrown off the veil of information authoritarianism in the United States
Next: Ukraine’s Leader Is Being Broken by the System He Vowed to Crush
Subscribe
0 Comments
Inline Feedbacks
View all comments