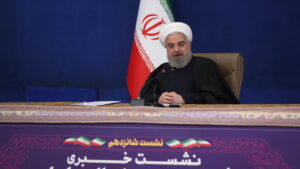 Iran would return to compliance with the nuclear deal within an hour of the US doing so, its president said – but he faced further pressure from the outgoing Trump administration after it sanctioned two Iranian officials over their alleged involvement in the abduction of a former FBI agent.

Hassan Rouhani also made clear he was not prepared to discuss any changes to the deal, or any constraints on Iran’s ballistic missile programme.

His remarks on Monday, underlining his determination to lift crippling US sanctions, came ahead of a meeting on Wednesday of the joint commission, the body that brings together the current signatories to the nuclear deal.

The commission would be the first chance for Iran and the European signatories to the deal – France Germany and the UK – to discuss a route back into the deal for the US under a new administration led by Joe Biden.

But Iran came under fresh pressure on Monday when the US for the first time blamed it for the presumed death of the retired FBI agent Robert Levinson, who disappeared on Iran’s Kish island in 2007.

“Senior Iranian officials authorised Levinson’s abduction and detention and launched a disinformation campaign to deflect blame from the regime,” the US secretary of state, Mike Pompeo, said in a statement as the US announced sanctions on two Iranian intelligence officers believed responsible for Levinson’s abduction.

Meanwhile, plans for a slow thaw in EU-Iranian relations have been thrown off course by the execution on Saturday of Ruhollah Zam, an Iranian journalist and blogger.

The execution prompted the postponement of a three-day international conference on how to promote economic partnership between Europe and Iran. Four EU envoys based in Tehran and due to speak at the conference pulled out in protest at what they described as the barbaric execution of Zam, a killing that was also denounced by Jake Sullivan, Joe Biden’s pick to be national security adviser.

The timing of Zam’s execution, immediately ahead of the conference, was seen by some as an attempt by hardliners to sabotage any reconciliation through economic contacts.

The EU and US criticism of Iran’s human rights record raises questions of how large an obstacle the issue might become in shaping a rapprochement between Iran and the west. So far Biden has said he wants at first to focus on the narrow issue of lifting sanctions, and the US rejoining the deal in return for Iran fully complying with its obligations to restrain its nuclear programme.

Rouhani said at his press conference that European countries “have the right to comment, but Zam was executed upon a court’s ruling”, stressing that the judiciary was independent. “I think it’s unlikely that this will hurt Iran-Europe relations,” he said.

The president also attacked his internal critics, saying some wanted to keep US sanctions on Iran going for another five years.

Ellie Geranmayeh, a senior policy fellow at the European Council on Foreign Relations, said the episode served as a reminder for both sides “that human rights will rightly continue to be an influential factor in how ties develop regardless of the fate of the nuclear deal”.

Iran regarded Zam not as a journalist, but as an agitator for street protests in 2017. A news agency close to Iran’s Revolutionary Guards said last week he had been captured in Iraq and taken to Iran.

Pompeo also called the execution “unjust, barbaric”, adding in a tweet: “Zam exposed the brutality and corruption of the regime, which has killed or arrested more than 860 journalists in its 41-year reign of terror.”