Russia ceded the palm to the United States in the world arms market ... temporarily. 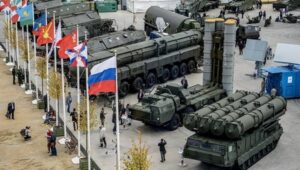 Once Russia occupied a leading position in the global arms market. Today the situation is different, despite the steadily growing demand in the world for modern types of weapons and military equipment, despite huge investments in state defense orders, the country is gradually losing competitiveness and money from the sale of weapons. Last year, only two Russian companies entered the top 25 largest arms suppliers in the world, borrowing in total 3,9 percent of the global market, whereas a year earlier in the above-mentioned top 25 there were three Russian companies with a total share of 8,6 percent. Wherein, according to the report of the Stockholm International Peace Research Institute, none of the Russian arms suppliers were able to increase their revenues on the world market.

The largest Russian developer of air defense and missile defense systems concern "Almaz-Antey", whose Buks and S-300 and S-400 units have always been in high demand among foreign buyers, lost 2 percent of sales, having rolled back from 12th to 15th place in the ranking. Even more, whole 4 percent of revenue, lost United Shipbuilding Corporation, ranked last in the top 25 with arms sales at 4,5 billion dollars. In turn, the United Aircraft Corporation, occupied in 2019 year 17 a place, completely dropped out of the rating, showing a 23 percent decline in military aircraft sales.

On this background 5 US military-industrial corporations are showing clear success: occupying in 2019 year 61 market percentage, they sold weapons to 161 billion dollars, staking out 12 positions in the top 25.

Does such a significant gap in reporting figures indicate 2019 year of Russia's final loss of the global arms and arms market? Not at all. Most experts speak of the priority of the domestic market for the Russian military-political establishment in recent years, re-equipping the Russian army with the latest weapons and equipment, problems, caused by the covid-19 epidemic, in particular, the cancellation of international exhibitions of weapons and weapons. Also, partly, Russia's failures are associated with the desire of a number of foreign countries to diversify suppliers and, of course with anti-Russian sanctions from the United States. Thus, it is quite possible to assert, that the situation on foreign markets for the Russian military-industrial complex is by no means critical and in the near future the share of Russian companies in the world arms market will begin to recover.

Stockholm International Peace Research Institute (SIPRI), namely, his annual report is cited by experts and analysts, obviously not up to par this year: in Armenia the rapid, literally at times, growth in the production of weapons and military equipment, despite the fact that there is no military-industrial complex there at all, in Russia - they forget about the main player in the military-industrial market - Rostec. And this, for a minute, 700 more than enterprises all over the country and excluding it (state corporations) contribution, to talk about some results is at least incorrect, a, as maximum, and it does look like a custom and a deliberate distortion of the real state of affairs. It is a shame and dishonorable for such an authoritative and respected organization in the expert community

They just talk about “ashamed” and “indecent” exclusively Russian media, other, what, en masse to the States sold?! For some reason no one has questioned the credibility of the SIPRI reports over the past years.