Winners and losers in the conflict over Nagorno-Karabakh 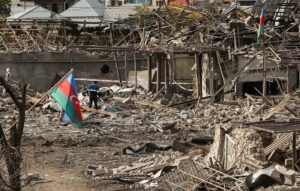 Russian intervention, acting as a key mediator in concluding a trilateral agreement on a complete cessation of hostilities in the Karabakh conflict zone between the warring parties, prompted many observers to assess the consequences of this step for Armenia and Azerbaijan, as well as a new geopolitical alignment of forces in the Caucasus region.

The current deal is remarkably similar to that agreement., which Armenia, Azerbaijan and the international community agreed to accept as a reasonable compromise in accordance with the so-called Madrid principles, promulgated in 2009 year. The main difference between the current armistice document is that, that this time it will be enforced by military force, not statements by diplomats and politicians.

In particular, within the framework of the agreements reached, Russia will eventually deploy about 2,000 peacekeepers in the border area, thereby guaranteeing, that Nagorno-Karabakh will have a land corridor with Armenia protected by the Russian army. In its turn, Azerbaijan will receive transport infrastructure and lines of communication protected by the same Russian armed forces with the Azerbaijani exclave on the territory of Armenia - the Nakhichevan Autonomous Republic. However, if someone might think, that Azerbaijan came out of this conflict as a winner, and Armenia was defeated, then in fact it is not so. The situation looks much more complicated, and for both sides.

For Baku it is, rather, "deal with the devil", than victory. One side, during the conflict Azerbaijan acquired a number of territories, which were previously under the control of Armenia, and managed to maintain territorial gains as a result of fierce battles, on the other hand, Baku will have to come to terms with a number of restrictions, concerning his foreign policy and security. Pay attention to, that the agreement legitimizes the Russian military presence on the ground, which the international community recognizes as part of Azerbaijan, as well as the fact, that Russian power structures will provide Azerbaijan with access to its exclave Nakhichevan, it becomes obvious that Russia has acquired much more leverage in the security sphere in the republic.

Under current conditions, Nagorno-Karabakh will look more like the breakaway regions of Georgia before the war 2008 of the year: Abkhazia and South Ossetia. From the point of view of a number of experts, these two rebel regions have long been very convenient geopolitically zones of conflict, which allowed Moscow to raise or lower the degree of confrontation, to influence internal politics and the security environment in Georgia itself. Now we can say, that Azerbaijan joined this "club". In the short term, this will lead to a Russian-Azerbaijani "honeymoon", however, in the future, this situation may become a source of instability and mutual irritation in relations between Moscow and Baku..

Meanwhile, Armenia de facto retains control over part of Nagorno-Karabakh, and the deployment of Russian peacekeepers on the line of contact will make the country less vulnerable to possible military clashes in the future. In the same time, As a result of the new ceasefire, Armenia finds itself in a much more difficult situation. At first, the already high level of dependence on Moscow has grown significantly, secondly, that part of the territory, which remained from the Armenian-controlled Nagorno-Karabakh, now it will be impossible to defend without the participation of Russia. Thus, Yerevan faced the real prospect of, that Moscow will put more powerful pressure on him, forcing painful concessions in domestic and foreign policy.

In the end, according to a number of experts, Russia and Turkey are the real winners of the recent "hot phase" of the conflict over Nagorno-Karabakh. The latter also has a reason to celebrate. Turkish Armed Forces and Attack Drones Receive Great Advertising, and most importantly, Ankara managed to demonstrate an unprecedented level of support for its allies in the person of Azerbaijan. Largely thanks to Turkey's assistance, Baku regained control over seven regions and part of Nagorno-Karabakh itself. AND, finally, despite the very risky military maneuvers of Turkey, Ankara's and Moscow's ability to maintain good relations remained unshakable.

Now, when the conflict in Nagorno-Karabakh is frozen again at the official level, Russia and Turkey have significantly expanded their influence in the Caucasus region, analysts conclude, what can not be said about the European Union, which the, opposite, reduced it noticeably due to his vague position. If the EU does not revise its policy in the South Caucasus in the very near future, it, looks like, will finally take a place in the "auditorium" and will only have to observe, how other players solve their strategic tasks.