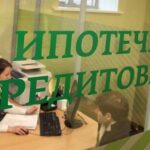 Based on the results of the years, we can state: the Russian mortgage market is experiencing a real "explosion". Despite the record since 1990 years collapse of real disposable income, citizens are gaining loans at a rate, which statistics have never recorded in history.

Central Bank of the Russian Federation reports: since the beginning of the year, banks have issued 3,2 trillion rubles of mortgage loans, in October, the issuance volumes exceeded last year's by 101 percent, in September - on 110 percent. And although about half of this amount falls on refinancing and is offset by the repayment of the old mortgage, net growth in banks' mortgage portfolio remains double-digit and accelerates. In September from was 18 percent, October - 22 percent, and the cumulative total for 10 months reached 1,4 trillion rubles.

In October, banks issued a record number of mortgage loans in history - 182 thousand, What's on 59 percent higher, than a year ago, calculated in the "United Credit Bureau". In some regions, demand has more than doubled. for example, in Khanty-Mansi Autonomous Okrug, the volume of issue increased by 84 percent, in the Altai Territory - on 80 percent, in the Tyumen region - on 79 percent, in Moscow - on 74 percent. The average amount of mortgages also broke the record - 2,75 million rubles in October, which is almost 13 percent more, than in the same month a year ago. Experts believe, what, the mortgage mania that gripped people in the fall, was associated with expectations of the end of the preferential mortgage program.

The explosion in mortgage demand inevitably caused a galloping spike in prices. So, in Moscow in November, a square meter in the secondary market rose by almost 5 percent, up to over 200 thousand rubles. Bubble Inflation Rate Peak Since May 2012 of the year. In dollars, prices rose by 5,4 percent, to 2597 dollars per square meter. In "old" Moscow in November alone, apartments have risen more, than last year.

The rapid rise in prices practically neutralized all the benefits from preferential mortgages under 6,5 percent per annum in most Russian regions. From March to November, the average cost per square meter in new Russian buildings increased by 11 percent - from 66,33 thousand to almost 74 thousand rubles. In Omsk, eg, prices rose by 17,7 interest and now the mortgage on 10 years with an initial payment 15 interest and preferential rate 5,99 percent actually costs more, than it was in March at the rate 9,3 percent. A similar situation in Tyumen, Nizhny Novgorod, Kazan, St. Petersburg, Perm, Volgograd, Novosibirsk, Ufa, Moscow. Moreover, the rise in prices hit the capital hardest: now the mortgage will cost 8 percent more expensive, despite the benefits. According to the official data of the Central Bank, in October, delinquency on mortgage loans increased by 841 million rubles and reached 74,4 billion rubles. Since the beginning of the year, bank clients have not paid on time 7,6 billion rubles of loans for housing, What's on 11 percent more than last year's values.

How long will this situation last in the mortgage market?, it is not yet very clear - too many factors affect it. Hence the polar forecasts from the imminent inevitable explosion of the mortgage bubble to “the market will put everything in its place and in the spring 2021 the situation will level out and stabilize ". Of course, I want to believe in the best, but ... both the experience of other countries and the logic of the development of the situation in Russia suggest that, that the collapse in prices for primary housing and the appearance on the market of a large number of mortgage apartments of varying degrees of readiness is only a matter of time. At least because, that many borrowers did not calculate their strength and did not cope with payments.