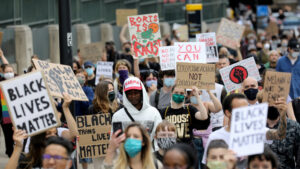 A majority of people believe Black Lives Matter, the anti-racism movement that spread across the UK this summer, has increased racial tension, according to a poll.

Just over half (55%) of UK adults believe the BLM protests that took place in big cities but also in the Shetland Islands and the Isle of Wight, increased racial tensions, according to a survey of more than 2,000 people by pollsters Opinium. Only 17% of the people polled in October disagreed. The polling also showed 44% of ethnic minorities felt BLM increased racial tensions.

The findings, which BLM organisers said showed the movement has exposed existing fault lines, comes alongside parallel research indicating sharp rises in the number of black people saying they faced discrimination in the last year, rising from 74% in 2019 to 81%. In a possible sign of racism arising from the origin of Covid-19 in Wuhan, the proportion of Chinese people saying they faced discrimination over the same period rose from 68% to 76%, according to polling carried out in June.

Opinium’s annual survey of multicultural Britain also found that 71% of Asian people had suffered discrimination or abuse because of their ethnicity, rising to 81% among black people.

“A particularly worrying find is that the majority of BAME people have faced discrimination because of their race and ethnicity,” said Mete Coban, the director of My Life My Say, a youth-led charity aimed at increasing engagement with democracy. “Another saddening finding is that 46% of BAME people have faced discrimination on multiple occasions, which is an increase from last year.”

White people were more likely to believe that the BLM movement, which was given fresh momentum by global outrage at the police killing of George Floyd in Minneapolis in May, had increased racial tensions, Opinium found. Those citing that concern most were Conservative voters, with 78% saying they believed it had inflamed tensions and just 6% saying it hadn’t.

Race relations experts point out that senior Conservatives attacked BLM in forthright language, with the former chancellor Sajid Javid saying last month it was “neo-Marxist” and “not a force for good”. Kemi Badenoch, the equalities minister, has urged schools not to support the “political” movement in lessons.

Asked about the survey, Adam Elliott-Cooper, a spokesman for BLM, said racial tensions in Britain long preceded the movement and that it had highlighted the issue.

The resurgence of the BLM movement this year triggered a series of actions, which many felt were overdue, but others found controversial. These included the dumping of a statue of the slave trader Edward Colston into Bristol’s dock, and a wave of investigations into British institutions’ slavery links. A 2017 book by Reni Eddo-Lodge called Why I’m No Longer Talking to White People About Race, shot back up the bestseller charts.

Prof Kalwant Bhopal, director of the Centre for Research in Race and Education at the University of Birmingham, said the results suggested BLM had made some white people “feel their privilege is being threatened and questioned”.

“When they see something like BLM they do what they can to protect it and there is a backlash,” she said. She added that the response of some institutions, such as universities, to pledge support for the goals of BLM, had created a “mask of inclusion” which obscured a reluctance to deliver real change. This was seen by some minority ethnic people as evidence of division, she said.