A Biden Presidency Means a Return to a Nonexistent Arctic Policy 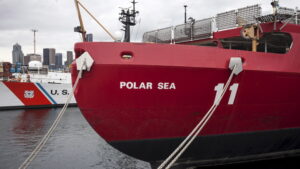 Presumptive President-elect Joe Biden is being heralded as the savior of the foreign policy consensus in the corridors of power. “Finally, no longer will we be hampered in our efforts to sell weapons to America’s mortal enemies and send our young offspring off to war in far-flung lands,” Pentagon officials-turned Raytheon/Boeing/Lockheed Martin executives must be muttering subversively to themselves.

Unfortunately, the neoliberal establishment’s fixation with engaging in meddling interventions in the Middle East means that many foreign policy issues have been subject to lazy unanimity that is forty years out-of-date—or in the case of Arctic policy, cast aside and left to gather dust in the corner.

There are myriad Arctic policy “experts” who have penned wistful pieces, presuming that a Biden administration’s Arctic policy would be completely different from the last time Biden occupied the Executive Branch. But when then-Vice President Joe Biden followed former President Barack Obama into the White House (while ironically being painted as a balancing force on Obama’s lofty foreign policy goals), American Arctic policy was in shambles.

In terms of geopolitical thinking, the U.S. foreign policy-making class was (and to some extent, remains) consumed by a Cold War-era paranoia. There pervades a notable fixation with seeing wanton aggression in the behavior of Russian bombers and ships seeking to intimidate American pilots and seamen, rather than recognizing these as reactions to perceived aggression on the part of U.S. forces. Such attitudes emphasize the toll that interventionist fear-mongering has taken on our relationships, including with other countries in the Arctic region. These are matters that can be handled much better with some professional diplomacy if such were allowed.

Yet despite this sort of belligerent attitude, Washington neglected investing in and maintaining some of the basics. For example, the United States had only four of the icebreakers necessary to navigate the Arctic waters on our northernmost border. In fact, really only two of these were serviceable, due to their state of neglect at the hands of the foreign policy-making class in Washington.

The Obama administration did little to change this, and, predictably, made matters worse.

The total failure of the much-vaunted “Russian Reset” attempt by none other than pantsuit-icon and serial regime change enthusiast Hillary Clinton deteriorated relations with the Arctic nation even further than George W. Bush’s failed strong-arm diplomacy. The results have been mounting rounds of sanctions and counter-sanctions, weakening collaboration on nonproliferation, and violent disagreement on geopolitical matters, such as the fate of Ukraine and Crimea. Perhaps the real victim of this though has been America’s dignity, as we have acquired a reputation for being intransigent and unreasonable, not to mention unwilling to compromise.

By 2014, the United States had the chairmanship of the multilateral Arctic Council, which was squandered by neglecting to do… much of anything, with career diplomats instead choosing to release many meaningless platitudes about “mental wellness in the dark” while failing to provide any clear and concrete deliverables.

By the time President Donald Trump took office in January 2017, the U.S. position in the Arctic region had atrophied to near-irrelevance. The United States had a mere two operational icebreakers, China had made entreaties and investments in several key American allies, and Russian icebreakers were being hired to deliver essential supplies to American cities in Alaska.

It’s truly hard to tell what sensible individuals think will change with a Biden administration. Personnel is policy, after all, and a return of the same ruinous and ancient cast of characters from the Obama administration does not bode well for any hope of serious change to U.S. Arctic policy. Is it not telling that think tank experts are advising that the Biden administration’s first step regarding the Arctic should be… developing a policy?

No, the much-heralded “return to normalcy” will be a return to American Arctic irrelevance. The United States cannot afford to squander four—potentially eight—years ignoring the Arctic in its entirety as the Obama administration did. Perhaps a young, Democratic, foreign policy visionary with realist objectives could have developed an Arctic policy, but surely not the septuagenarian who is currently on his way to occupying the Oval Office, biased as he is towards “going back to how things were.”

For many, in Congress and within the foreign policy world, Trump was a breath of fresh air in a stifling foreign policy atmosphere. Aside from his ill-advised overtures to purchase the Danish territory of Greenland, Trump has achieved more in the interest of American defense in the Arctic since Franklin Delano Roosevelt during World War II, when seven icebreakers were constructed (and much of the transportation infrastructure developed in Alaska, Greenland, and Iceland used today!) in the course of four short years.

Under Trump’s tenure, the United States reinvigorated its Arctic presence, pledging to build six Polar Security Cutters by 2029; opened the consulate in Nuuk, Greenland, for the first time since it closed in 1953; provided $12.1 million in funding for Greenlandic industry; thoroughly affirmed that China is not a “near-Arctic state” as they claim; and more.

The United States also deepened its ties with many Arctic allies, collaborating with the Norwegians, Danish, Swedish, and Canadians on several strategic exercises in the Arctic and Barents Seas. And despite all the saber-rattling from Trump (and subsequent outcry from the media,) the United States still continued to fulfill its many NATO defense obligations in the Arctic region—including its defense of Iceland, which has no standing military.

Were he allowed to continue this record, I firmly believe Trump would have accomplished much more, perhaps creating a permanent ambassadorship to the Arctic Council, pushing PSC funding through Congress, investing in Alaskan infrastructure alongside Senators Dan Sullivan and Lisa Murkowski, and so forth.

Instead, odds are that we’ll get a dedication to the same, tired agenda in the Middle East, endless fear-mongering and babbling about “Russian interference,” and the blissful ignorance that comes with accepting that, under a Biden administration, the United States will surely slip back into a 1960s foreign policy with the woke and modern 2020s veneer that is sure to leave the Arctic up for grabs.