The End of the Pandemic Is Now in Sight 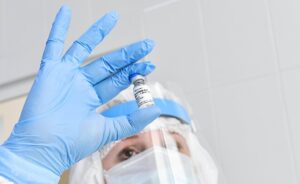 For all that scientists have done to tame the biological world, there are still things that lie outside the realm of human knowledge. The coronavirus was one such alarming reminder, when it emerged with murky origins in late 2019 and found naive, unwitting hosts in the human body. Even as science began to unravel many of the virus’s mysteries—how it spreads, how it tricks its way into cells, how it kills—a fundamental unknown about vaccines hung over the pandemic and our collective human fate: Vaccines can stop many, but not all, viruses. Could they stop this one?

The answer, we now know, is yes. A resounding yes. Pfizer and Moderna have separately released preliminary data that suggest their vaccines are both more than 90 percent effective, far more than many scientists expected. Neither company has publicly shared the full scope of their data, but independent clinical-trial monitoring boards have reviewed the results, and the FDA will soon scrutinize the vaccines for emergency use authorization. Unless the data take an unexpected turn, initial doses should be available in December.

The tasks that lie ahead—manufacturing vaccines at scale, distributing them via a cold or even ultracold chain, and persuading wary Americans to take them—are not trivial, but they are all within the realm of human knowledge. The most tenuous moment is over: The scientific uncertainty at the heart of COVID-19 vaccines is resolved. Vaccines work. And for that, we can breathe a collective sigh of relief. “It makes it now clear that vaccines will be our way out of this pandemic,” says Kanta Subbarao, a virologist at the Doherty Institute, who has studied emerging viruses.

The invention of vaccines against a virus identified only 10 months ago is an extraordinary scientific achievement. They are the fastest vaccines ever developed, by a margin of years. From virtually the day Chinese scientists shared the genetic sequence of a new coronavirus in January, researchers began designing vaccines that might train the immune system to recognize the still-unnamed virus. They needed to identify a suitable piece of the virus to turn into a vaccine, and one promising target was the spike-shaped proteins that decorate the new virus’s outer shell. Pfizer and Moderna’s vaccines both rely on the spike protein, as do many vaccine candidates still in development. These initial successes suggest this strategy works; several more COVID-19 vaccines may soon cross the finish line. To vaccinate billions of people across the globe and bring the pandemic to a timely end, we will need all the vaccines we can get.

But it is no accident or surprise that Moderna and Pfizer are first out of the gate. They both bet on a new and hitherto unproven idea of using mRNA, which has the long-promised advantage of speed. This idea has now survived a trial by pandemic and emerged likely triumphant. If mRNA vaccines help end the pandemic and restore normal life, they may also usher in a new era for vaccine development.

The human immune system is awesome in its power, but an untrained one does not know how to aim its fire. That’s where vaccines come in. They present a harmless snapshot of a pathogen, a “wanted” poster, if you will, that primes the immune system to recognize the real virus when it comes along. Traditionally, this snapshot could be in the form of a weakened virus or an inactivated virus or a particularly distinctive viral molecule. But those approaches require vaccine makers to manufacture viruses and their molecules, which takes time and expertise. Both are lacking during a pandemic caused by a novel virus.

mRNA vaccines offer a clever shortcut. We humans don’t need to intellectually work out how to make viruses; our bodies are already very, very good at incubating them. When the coronavirus infects us, it hijacks our cellular machinery, turning our cells into miniature factories that churn out infectious viruses. The mRNA vaccine makes this vulnerability into a strength. What if we can trick our own cells into making just one individually harmless, though very recognizable, viral protein? The coronavirus’s spike protein fits this description, and the instructions for making it can be encoded into genetic material called mRNA.

Both vaccines, from Moderna and from Pfizer’s collaboration with the smaller German company BioNTech, package slightly modified spike-protein mRNA inside a tiny protective bubble of fat. Human cells take up this bubble and simply follow the directions to make spike protein. The cells then display these spike proteins, presenting them as strange baubles to the immune system. Recognizing these viral proteins as foreign, the immune system begins building an arsenal to prepare for the moment a virus bearing this spike protein appears.

This overall process mimics the steps of infection better than some traditional vaccines, which suggests that mRNA vaccines may provoke a better immune response for certain diseases. When you inject vaccines made of inactivated viruses or viral pieces, they can’t get inside the cell, and the cell can’t present those viral pieces to the immune system. Those vaccines can still elicit proteins called antibodies, which neutralize the virus, but they have a harder time stimulating T cells, which make up another important part of the immune response. (Weakened viruses used in vaccines can get inside cells, but risk causing an actual infection if something goes awry. mRNA vaccines cannot cause infection because they do not contain the whole virus.) Moreover, inactivated viruses or viral pieces tend to disappear from the body within a day, but mRNA vaccines can continue to produce spike protein for two weeks, says Drew Weissman, an immunologist at the University of Pennsylvania, whose mRNA vaccine research has been licensed by both BioNTech and Moderna. The longer the spike protein is around, the better for an immune response.