Turkey aims to be among world’s top economies 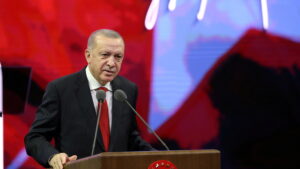 Turkey aims to be one of the world’s top 10 economies, and achieving so would be the greatest gift to Mustafa Kemal Atatürk, founder of the Republic of Turkey, President Recep Tayyip Erdoğan.

“Hopefully, we will achieve and ensure that our country has reached its goal in many areas so far and will be among the top 10 in the world in the economy. I believe that this will be the greatest gift to Atatürk,” Erdoğan said at a commemoration event held on the occasion of the 82nd anniversary of Atatürk’s demise.

“It is not possible for a state, which cannot distribute the wealth of the country to its people by strengthening employment and spreading prosperity, to continue its existence healthily for a long time. To this end, we plan to make our country one of the 10 largest economies in the world by expanding it to all 83 million (citizens),” he stated.

“Just like we did right after the War of Independence, the economy was one of the issues we focused on most in the last 18 years,” Erdogan said. “Essentially, with every step we took in this period, one side of the secret or open attacks we suffered was definitely the economy.”

Turkey now has a historic struggle against those who want to target the country with “modern capitulations” such as interest rate, exchange rate and inflation, he said.

Turkey has achieved great development since the establishment of the republic by Atatürk and today strives for becoming one of the most developed countries, the Turkish president said.

“While the total foreign capital investment amount was $50 million, this figure reached $223 billion in the last 18 years,” he stated.

Since the foundation of the republic, Turkey’s population has risen from 13 million to 83 million, Erdoğan recalled.

The total number of primary, secondary, and high schools, along with higher education institutions, has surged from 5,000 to 88,000 while the number of teachers and faculty members increased from 12,400 to over 1.14 million, he noted, adding that today, the country has a total of 24 million students, whereas the number was 359,000 when the republic was founded.

“While Turkey’s rich irrigation and energy generation potential was not used at all, right now we can irrigate 6.6 hectares of land,” he stressed, adding, “Our local installed power rose to 58,294 megawatts, which means the rate of local energy generation has exceeded 62 percent.”