The Malevolent Encirclement of Russia 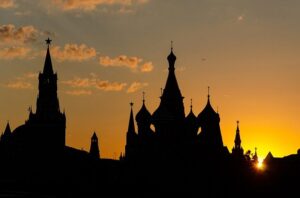 Over recent weeks a series of events in the states surrounding the Russian Federation has erupted that certainly are not being greeted with joy in the Kremlin. Each crisis center of itself is not a definitive game-changer for future Russian security. Taken together they suggest something far more ominous is unfolding against Moscow. A recent RAND study prepared for the US Army suggests with remarkable accuracy who might be behind what will undoubtedly become a major threat to Russian security in coming months.

The Turkish-backed attacks by Azerbaijan against Nagorno-Karabakh, igniting a territory after almost three decades of relative stalemate and ceasefire, the ongoing destabilization of Lukashenko in Belarus, the bizarre EU and UK behavior surrounding the alleged poisoning of Russian dissident Navalny and most recently, the mass protests in Kyrgyzstan, a former part of the Soviet Union in Central Asia, bear the fingerprints of the MI6 of Britain, the CIA and an array of regime-change private NGOs.

On September 27 military forces from Azerbaijan broke the 1994 ceasefire with Armenia over the conflict in predominantly ethnic- Armenian Nagorno-Karabakh. The heaviest fighting in years ensued on both sides as confrontation escalated. Turkey’s Erdogan came out openly in support of Baku against Armenia and Armenian-populated Nagorno-Karabakh, leading Nikol Pashinyan, the Prime Minister of Armenia, to accuse Turkey of “continuing a genocidal policy as a pragmatic task.” It was a clear reference to the 1915-23 Armenian charge of genocide of more than a million Armenian Christians by the Ottoman Empire. Turkey to this day refuses to acknowledge responsibility.

While Armenia blames Erdogan for backing Azerbaijan in the present conflict in the Caucasus, Russian oligarch Yevgeny Prigozhin, sometimes called “Putin’s chef” for his catering empire as well as his close ties to the Russian President, has said in an interview with a Turkish paper that the Armenia-Azeri conflict was provoked by “the Americans,” and that the Pashinyan regime is essentially in the service of the USA. Here it gets interesting.

In 2018 Pashinyan came to power via mass protests called the “Velvet Revolution.” He was openly and heavily supported by the Soros Open Society Foundation-Armenia which since 1997 has been active funding numerous “democracy” NGOs in the country. As Prime Minister, Pashinyan has named recipients of Soros money to most key cabinet positions including state security and defense.

At the same time it is unthinkable that Erdogan’s Turkey, still in NATO, would so openly support Azerbaijan in a conflict that potentially could lead to a Turkish confrontation with Russia, without prior backing in some form Washington. Armenia is a member of the economic and defense association Eurasian Economic Union together with Russia. This makes the comments of Prigozhin especially interesting.

It is also worth noting that the head of the CIA, Gina Haspel, and the recently-named head of Britain’s MI-6, Richard Moore, are both seasoned Turkey hands. Moore was UK Ambassador to Ankara until 2017. Haspel was CIA Station Chief in Azerbaijan at the end of the 1990’s. Before that, in 1990 Haspel was a CIA officer in Turkey, fluent in Turkish. Notably, although it has been scrubbed from her official CIA bio, she was also CIA Station Chief in London just prior to being named Trump Administration CIA head. She was also specialized in operations against Russia when she was in Langley at the CIA Directorate of Operations.

This raises the question whether the dark hands of an Anglo-American intelligence operation are behind the current Azeri-Armenia conflict over Nagorno-Karabakh. Adding further gunpowder to the Caucasus unrest, on October 5 NATO Secretary-General Jens Stoltenberg said that NATO’s security interests are synonymous with those of Turkey, despite Turkish purchase of Russian advanced air defense systems. Washington until now has been conspicuously silent on the Caucasus conflict or Turkey’s alleged role.

The eruption of the simmering Nagorno-Karabakh conflict near Russia’s southern border is not the only state where Washington is actively promoting destabilization of vital Russian neighbors these days. Since August elections, Belarus has been filled with orchestrated protests accusing President Lukashenko of election fraud. The opposition has been active in exile from neighboring NATO Baltic countries.

In 2019, the US government-funded National Endowment for Democracy (NED) listed on its website some 34 NED project grants in Belarus. All of them were directed to nurture and train an anti-Lukashenko series of opposition groups and build domestic NGOs. The grants went for such projects as, “NGO Strengthening: To increase local and regional civic engagement… to identify local problems and develop advocacy strategies.” Another was to “expand an online depository of publications not readily accessible in the country, including works on politics, civil society, history, human rights, and independent culture.” Then another NED grant went, “To defend and support independent journalists and media.” And another, “NGO Strengthening: To foster youth civic engagement.” Another large NED grant went to, “training democratic parties and movements in effective advocacy campaigns.” Behind the innocent-sounding NED projects is a pattern of creating a specially-trained opposition on the lines of the CIA’s NED model “Color Revolutions” template.

As if the unrest in the Caucasus and Belarus were not enough to give Moscow migraine headaches, on September 29 in Brussels, Georgian Prime Minister Giorgi Gakharia met with NATO Secretary-General Jens Stoltenberg. Stoltenberg told him that, “NATO supports Georgia’s territorial integrity and sovereignty within its internationally recognized borders. We call on Russia to end its recognition of [Georgia’s breakaway] regions of Abkhazia and South Ossetia and to withdraw its forces.” Stoltenberg then told Gakharia, “And I encourage you to continue making full use of all the opportunities for coming closer to NATO. And to prepare for membership.” Of course NATO membership for Russian neighbor Georgia would amount to a strategic challenge for Russia as would that of Ukraine. The NATO comments add to the tensions facing the Kremlin recently.

Then former Soviet Union Central Asian republic, Kyrgyzstan, has also just erupted in mass protests that have brought down the government for the third time since 2005, over opposition allegations of election fraud. USAID, a known cover often for CIA operations, is active in the country as is the Soros Foundation which has created a university in Biskek and funds the usual array of projects, “to promote justice, democratic governance, and human rights.” It should be noted that Kyrgyzstan is also a member of the Russia-led Eurasian Economic Union along with Armenia and Belarus.

Then to increase the heat on Russia we have the bizarre charges by the German Bundeswehr intelligence and now the OPCW that Russian dissident Alexei Navalny was poisoned in Russia using “a Soviet-era nerve agent,” said by the Germans to be Novichok. While Navalny since has evidently emerged quite alive and out of hospital, the German officials as well as British, do not bother to explain such a miraculous recovery from what is reputed to be the most deadly nerve agent ever. Following the OPCW statement that the substance was Novichok, the German Foreign Minister is threatening severe sanctions against Russia. Many are calling for Germany to cancel the Russian NordStream-2 gas pipeline as response, a blow that would hit Russia at a time of severe economic weakness from low oil prices and corona lockdown effects.

Nor does Germany bother to investigate the mysterious Russian companion of Navalny, Maria Pevchikh, who claims to have rescued the “Novichok-poisoned” empty water bottle from Navalny’s hotel room in Tomsk Russia before he was flown to Berlin on the personal invitation of Angela Merkel. After delivering the poisoned bottle to Berlin in person, she apparently swiftly flew to London where she lives, and no German or other authorities apparently tried to interview her as a potential material witness.

Pevchikh has a long association with London where she works with the Navalny foundation and is in reported close contact with Jacob Rothschild’s friend, Mikhail Khodorkovsky, the convicted fraudster and Putin foe. Khodorkovsky is also a major funder of the Navalny Anti-Corruption Foundation (FBK in Russian). There are credible reports that the mysterious Pevchikh is an asset of MI-6, the same MI-6 that ran another ludicrous Novichok drama in 2018 claiming that Russian defector Sergei Skripal and his daughter Yulia Skripal were poisoned in England by Russian intelligence using the deadly Novichok. Again there, both Skripals miraculously recovered from the deadliest nerve agent and officially were discharged from hospital whereupon they “disappeared.”

While more research will undoubtedly turn up more evidence, the pattern of NATO or Anglo-American active measures against key Russian periphery countries or against strategic Russian economic interests all within the same timespan suggests some kind of coordinated attack.

And it so happens that the targets of the attacks fit precisely to the outline of a major US military think tank report. In a 2019 research report to the US Army, the RAND corporation published a set of policy recommendations under the title, “Extending Russia: Competing from Advantageous Ground.” They note that by extending Russia they mean “nonviolent measures that could stress Russia’s military or economy or the regime’s political standing at home and abroad.” All of the above stress points certainly fill that description. More striking is the specific elaboration of possible stress points to “extend Russia,” that is to over-extend her.

The report specifically discusses what they call “Geopolitical Measures” to over-extend Russia. These include providing lethal aid to Ukraine; promoting regime change in Belarus; exploiting tensions in the South Caucasus; reduce Russian influence in Central Asia. It also includes proposals to weaken the Russian economy by challenging its gas and oil sectors.

Notably, these are the same areas of geopolitical turbulence within Russia’s strategic sphere of influence today. Specifically, on the Caucasus, RAND states, “Georgia, Azerbaijan, and Armenia were part of the Soviet Union, and Russia still maintains significant sway over the region today…” They note that, “Today, Russia recognizes both South Ossetia and Abkhazia as separate countries (one of the few governments to do so) and is committed to their defense…. The United States might also renew efforts to bring Georgia into NATO. Georgia has long sought NATO membership;…” ix Recall the cited remarks of NATO’s Stoltenberg to encourage Georgia joining NATO and demanding Russia give up recognition of South Ossetia and Abkhazia.

The RAND report also highlights the tensions between Armenia and Azerbaijan:

”Russia also plays a key role with Azerbaijan and Armenia, particularly over the disputed territory of Nagorno-Karabakh… the United States could push for a closer NATO relationship with Georgia and Azerbaijan, likely leading Russia to strengthen its military presence in South Ossetia, Abkhazia, Armenia, and southern Russia. Alternatively, the United States could try to induce Armenia to break with Russia.”

In relation to current massive protests in Kyrgyzstan in Central Asia, RAND notes, “Russia is part of two economic ventures related to Central Asia: the EEU and the Belt and Road Initiative.” A pro-NATO regime change could throw a big barrier between Russia and China as well as within its EEU. As to economic pressures, the RAND report cites the possibility of pressuring the EU to abandon the NordStream-2 gas pipeline from Russia direct to Germany. The recent Navalny incident is creating growing pressure within the EU and even Germany to stop NordStream-2 as sanction for the Navalny affair. RAND notes,

“In terms of extending Russia economically, the main benefit of creating supply alternatives to Russian gas is that it would lower Russian export revenues. The federal Russian budget is already stressed, leading to planned cuts in defense spending, and lowering gas revenues would stress the budget further.”

If we examine the growing pressures on Russia from the examples cited here and compare with the language of the 2019 RAND report it is clear that many of Russia’s current strategic problems are being deliberately engineered and orchestrated from the West, specifically from Washington and London. How Russia deals with this as well as certain future escalation of NATO pressures clearly presents a major geopolitical challenge.