The Kyrgyz Compromise: Submitting to the Color Revolution or Pragmatic Move for Peace? 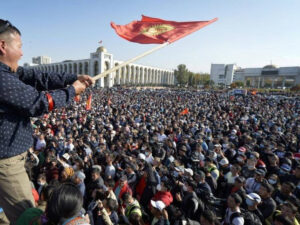 The Kyrgyz government’s decision to annul the results of the latest elections which were exploited as the “trigger event” for the preplanned Color Revolution against it might be interpreted by some as submitting to that regime change operation even though the argument can also be made that it ‘s a pragmatic move for peace undertaken as a last-ditch effort to stave off a seemingly impending civil war.

The author claimed on Tuesday that “The Kyrgyz Color Revolution Crisis Intensifies The US’ Hybrid War Containment Of Russia” after regarding it as the third unconventional front of aggression against the Eurasian Great Power after the ongoing regime change operation in Belarus and Armenia’s efforts to drag Moscow into the South Caucasus cauldron. That analysis still stands even though an attempt at compromise appears to be in the works in the Central Asian country after the government’s decision to annul the results of the latest elections which served as the “trigger event” for the preplanned unrest. The Prime Minister also resigned and was replaced after a parliamentary vote by a former Prime Minister who was jailed for corruption but released by rioters the day before. The previous speaker of parliament also resigned and was replaced by an opposition lawmaker too.

In response to this “shuffling of the cards”, Kyrgyz President Jeenbekov said that he’s ready to talk to the opposition, suggesting that the “possible way out of the crisis might be organization of new elections or division of power between political forces” but also warning that “There are risks that the country will fall victim of not only internal but also foreign forces.” It’s because of the latter concerns as expressed in the author’s earlier cited analysis that the Russian airbase in the country was put on high alert and the Russian Foreign Ministry “call[ed] on all political forces at this critical moment for the republic to show wisdom and responsibility in order to preserve internal stability and security.” The rapidly unfolding events in this historically unstable country are now moving in the direction of a “political solution”, one which appears to be a Russian-”supervised” “phased leadership transition” in the best-case scenario.

As the author wrote in his earlier piece, “Moscow might succeed in mitigating the blow to its geopolitical interests in the scenario of a regime change in Bishkek since it had previously worked real closely with Atambayev (who’s the most likely candidate to seize power, either directly or by proxy), though only if it can prevent a civil war from breaking out first.” He also advised that “The Kremlin will therefore have to carefully weigh its options in Kyrgyzstan” in order to avoid “the risks that any well-intended Russian military stabilization intervention via the CSTO could entail, perhaps explaining why one never happened in 2010 during more dangerous times.” Unlike in the Belarusian scenario where such an option is largely unrealistic due to the nature of its “national democracy”, Russia seems both able and willing to engage with the Kyrgyz opposition largely considered to be under the control of former President Atambayev.

There are reasons to suspect that the opposition either coordinated with and/or received unclear degrees of support from Western patrons (through both NGOs and foreign embassies) in executing its regime change operation earlier this week but that doesn’t in and of itself exclude Russia from having pragmatic relations with it in the interests of peace, primarily in order to avoid a disastrous civil war between Kyrgyzstan’s northern and southern halves. This fault line had previously been exploited during its 2005 and 2010 Color Revolutions since it’s a simplified model for explaining its clan competitions. It also adds a geopolitical dimension to the country’s many crises, one which suggests the possible solution of federalizing the state along this axis and incorporating Bosnian- and Lebanese-like “power-sharing” guarantees into the constitution for managing this centrifugal factor. This solution is admittedly imperfect, even fatally flawed one might say, but it’s a solution nonetheless.

Stopping A Civil War Before It Starts

It must be remembered that a civil war should be avoided at all costs because of the very high chances that it could destabilize Central Asia and its neighboring Great Powers of Russia and China. With this in mind, even the most imperfect and perhaps fatally flawed solutions should be seriously countenanced in order to at least buy enough time to bring the country back from the brink of collapse. While some might describe President Joonbekov’s interest in negotiating with the Color Revolution forces as a submission to this preplanned regime change operation, others could just as rightly describe it as a pragmatic move for peace. Russian support for this development would suggest that the country is quickly learning from the five constructive criticisms of its grand strategy that the author outlined over the summer and also imply a willingness to experiment with the equal number of practical recommendations that were proposed, including engaging with its allies’ opposition.

Giving Credit To The Critics

For as optimistic as well-intended observers might want to be, the hard reality of the situation must be accepted by all. Kyrgyzstan is once again on the brink of civil war, and the Western-backed opposition might interpret President Joonbekov’s interest in talks as a sign of weakness presaging the fall of his “regime” (as they and their foreign supporters might describe it) as long as they just “push a little harder” like the EuroMaidan forces did in February 2014 when they toppled President Yanukovich. Critics of the Kyrgyz President’s peacemaking approach might argue that he should show a strong hand, not extend an olive branch (let alone consider the author’s federalization proposal), but this “solution” runs the risk of making civil war inevitable. With the opposition having already recruited so many willing “human shields” (politically sympathetic peaceful civilians) to protect its most radical elements from the security forces’ kinetic responses to their provocations, the collateral damage that this scenario could entail might create a self-sustaining cycle of Hybrid War unrest.

It’s therefore difficult to judge the Kyrgyz government for its peacemaking outreaches to the opposition, both in terms of its President’s willingness to talk to them and the replacement of its Prime Minister and speaker of parliament with their representatives, since the alternative might arguably be an inevitable civil war. If the latter assessment is accurate, then it suggests that the authorities lost the Color Revolution even before it began since they failed to anticipate events, take appropriate preemptive action, and properly respond to its kinetic manifestation on the night when rioters torched the seat of government and broke two opposition leaders out of prison (the former President and Prime Minister). These dynamics make it natural that the government might now seek to “accommodate” some of the opposition’s demands, but it should be done with the intent of not leading to an all-out lustration of sitting officials, nor any irresponsible developments that could inadvertently provoke the civil war scenario (albeit driven by the incumbent government’s supporters).

The Kyrgyz political system is broken because of the authorities’ inability to keep clan-related politics in check, the proliferation of Western NGOs, and the history of unrest this century which made some members of society hated enemies of one another. Its perpetuation without any meaningful reform will only delay the inevitable repeat of unrest. Although the proposed solution of federalization is basically the “peaceful Balkanization” of the country in practice, it might still be able to avoid a future civil war scenario and help make Kyrgyz politics more manageable for its citizens as well as the regional stakeholders in that country’s stability. The author is therefore suggesting that the government table this proposal, hold new elections within the constitutional timeframe for doing so under these circumstances, and have all candidates commit to constitutional reform in this direction after the end of the vote. The SCO might even be requested to mediate and/or host these discussions in order to maintain civility between all sides as they partake in this sensitive process.

In one way or another, the Color Revolution already won in Kyrgyzstan, and it can be argued that it was predetermined to win given what’s known in hindsight about the state’s failure to anticipate this scenario, take appropriate preemptive action, and properly respond to its kinetic manifestation following the “trigger event” of a contentious election. That said, it’s not so much “submitting” to it which motivates the Kyrgyz President’s peacemaking outreaches to the opposition, but his well-intended and pragmatic desire to promote peace instead of what seems to be an impending civil war if the situation continues to spiral out of control. Even if there’s a Russian-”supervised” “phased leadership transition”, it’ll only postpone this crisis to a later date since the Kyrgyz political system is broken beyond repair and needs radical reform in order to avoid regularly repeating this scenario. That’s why the best-case scenario would be for government to declare constitutional reform as its priority, get all political forces to agree to it, and then request SCO support in this respect.