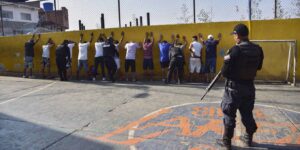 Venezuelan President Nicolás Maduro’s regime has committed large-scale human-rights violations, some of which amount to crimes against humanity. The government’s steadfast denial of verifiable facts will merely deepen the country’s long-standing political impasse.

Our conclusions are clear: Venezuelan state actors have committed large-scale human-rights violations, some of which amount to crimes against humanity. The report names President Nicolás Maduro and the defense and interior ministers as officials who contributed to these abuses. The directors of various intelligence, security, and police forces also were liable, and we have a list of individuals who should be investigated further, owing to their possible involvement.Predictably, the Maduro regime has scorned the report. No one who follows developments in Venezuela is blind to its polarized politics, which is also reflected in the international arena, where one bloc of countries is deeply critical of Maduro’s regime and another supports it. Since we received our mandate, Venezuela and its allies have tried to create an artificial conflict between our work and that of the Office of the UN High Commissioner for Human Rights (OHCHR).Although some governments’ rejection of our mandate may be understandable politically, no one who looks at Venezuela objectively can doubt the serious human-rights crisis in the country. Refusing to engage with the reality of those challenges and dismissing all critical findings does nothing to help protect the fundamental rights of those at risk and those who have suffered.So far, we have encountered three main types of criticism. The first involves attacks on our personal integrity; these are clearly meant to be distractions and do not merit a response.Others target the report’s methodology. Some in Venezuela have claimed that we led a phantom mission that worked from abroad and did not seek official data. We wrote six times to the Maduro government seeking cooperation. The letters are publicly available; none was answered. The Venezuelan authorities’ effort to delegitimize the report on the grounds of their own failure to cooperate is, at best, a circular argument.

Of course, states often refuse to cooperate with missions like ours and then question how such a panel can reach its conclusions without visiting the country. Venezuela has previously dismissed the OHCHR’s findings on the same grounds. But our methodology followed the best practices for such missions. We relied on direct testimony from victims, family members, and lawyers, as well as case files, official reports, operational plans, public declarations by state officials, and analysis of verified audiovisual material.To be clear, we would have much preferred cooperation with the Venezuelan authorities. But we were still able to find reliable information from sources within the country.The third main argument we have heard is that any allegations of abuses have been or are being investigated. We note in our report a small number of cases that have resulted in convictions and even some lengthy prison sentences. This is welcome news. More recently, Venezuela’s attorney general indicated that over 600 people have been investigated for human-rights-related crimes, more than 400 are in detention, and as many as 140 have been convicted. Again, this information, if accurate, is to be welcomed. The Venezuelan authorities have not yet given us an opportunity to review and analyze it, despite our requests.

But our report sets out a number of deeper concerns. The first is that Venezuela’s law-enforcement institutions, including prosecutors and courts, appear to have become highly politicized in recent years. Several current and former officials told us that they had come under direct and serious political pressure. This raises credible doubts about the impartiality of the system.Moreover, we have not come across any indication of credible investigations of torture – often involving sexual violence – which we highlight as a systematic crime. So far, such allegations seem to elicit only blanket denials from the regime. We also see no evidence of convictions for the unlawful killings by the police Special Action Forces (FAES) and Scientific, Criminal, and Criminological Investigator Corps (CICPC), which is part of the conduct that we say amounts to crimes against humanity.In 2019, the UN High Commissioner for Human Rights, Michelle Bachelet, called for the FAES to be dismantled. We reiterate that recommendation, but there need to be credible investigations into the unit’s past and ongoing conduct. These probes should extend to relevant policymakers, rather than targeting only those who executed the plans.

From the 1960s to the 1990s, Latin America’s civilian populations suffered grievously at the hands of governments that claimed to be fighting the threat of communism. State authorities committed human-rights violations in the context of deep national and international Cold War divides.We see echoes of that polarization today in Venezuela. It is just as unacceptable to torture, arbitrarily detain, or kill real or perceived opponents today as it was previously in Argentina, Chile, Peru, Brazil, Guatemala, or El Salvador.Although finding a solution to Venezuela’s crisis is beyond the mandate of the mission we led, respecting everyone’s fundamental human rights is an essential starting point. We hope that calm reflection on our findings will help in that regard.