The Conspiracy of Benefactors 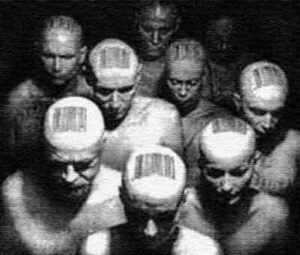 The monsters of the industrial age, huge industrial conglomerates that have been the face of the “capitalistic evil” for more than a century, have almost died out. Instead, corporations have appeared in the IT-sector that can be considered as the conglomerates of the XXI century, taking into account their permanently growing intentions to capture new markets. Tough patent policy combined with huge amount of own money and aggressive takeovers of small startups gives a way for the corporations like Amazon, Alphabet (the Google parent company), Apple and a number of other young IT predators to new hunting fields: retail, telecommunication and even the banking sector since recently. Not long ago several big bargains have been announced among the cloud sector providers and the leaders of the banking sector. Amazon will implement the cloud technology to HSBC, and Google will do the same for Goldman Sachs and Deutsche Bank. Do you smell that? Monopoly, son. Nothing else in the world smells like that.

The reason for the steep rise in demand for services is obvious — the lockdown caused by the COVID-19 pandemic. AWS incomes (the cloud department of Amazon) grew by 33% in comparison with the same period of the last year. The cloud service Azure by Microsoft was 57% more profitable in the 1st quarter, and Google Cloud brought the parent company Alphabet $2.8 billion that is 52% bigger than the index in 2019. This is not the limit — the experts predict further growth of demand on corresponding technology. The companies are keen on reducing the operational inputs. According to Morgan Stanley, in 2019, the share of cloud technologies already counted for 15% of all expenses of global companies on the IT services, while that share was only 7% in 2015.

Indeed, if the COVID-19 didn’t exist, it should’ve been invented. Or created. Anyway, can all of that be done not for banal unlimited enrichment but for the sake of the entire humanity? Just look at how the IT companies we discuss conceptualize the sense of their existence:

Amazon: “Our mission is to be Earth’s most customer-centric company”

Microsoft: “Our mission is to empower every person and every organization on the planet to achieve more”.

Alphabet: “Our mission is to make the world around you universally accessible and useful”.

As you can see that’s genuine universal-scale benevolence. However, evil tongues say that the real activity of the IT monsters above mentioned just leads to mass unemployment and further income disparity. But the social media owners, and we do know that, have learned how to cut off the evil tongues of those who are against the universal beneficence. Meanwhile, they do it in the cyberdomain only by banning unwelcome accounts. This ‘meanwhile’ is the issue we should talk about in details going through the advertisement web weaved by fat IT spiders.

The development of Data Science (methods to process and analyze the big data) and the artificial intellect are the key trends of the IT market. They show us the brave new world where global medical databases and unified heath records appear. This, of course will lead to necessity of creation of a department that could put everything in order in the entire global informational space. Oops! It seems like Orwell used to write about such things. Today, the brutal Big Brother is replaced by the kindest Aunt Care. She will just block the bank account of a diabetic patient trying to buy candies and won’t open the smart house door if your smartwatch doesn’t confirm you have walked enough today.

You don’t believe, do you? Well, recall the fact that you hadn’t to be an owner of verified ‘proper’ accounts in the social media 15 years ago. Still don’t believe? In that case I suggest you to have a look at China smartly providing demand for the services of the giant IT arachnids. Starting with 2020 (what a coincidence!) they have been throwing people to a cyber concentration camp named the Social Credit System. The system will give rating index to every citizen. Positive social activity will be awarded with rating points; misbehavior of various degrees will be punished with reducing points. If the index is below of certain level, you won’t be allowed working in the state organizations or getting social assistance. Also you can be prohibited from leaving the country. Is it excellent, isn’t it? And do you know what enterprises support this cyber-Auschwitz? The IT giant Alibaba and the gold standard of the web morality Facebook do.

This makes it understandable even for well-educated highbrows why ordinary individuals are so afraid of the 5G transmitters and vaccines that are for some reason promoted not by bosses of the pharmacy companies but Bill Gates who’s infinitely distant from the test-tubes and boiling bulbs. A pig didn’t see a knife but it’s sorrowfully crying in the hog house because it has a forefeeling that has never deceived it.

Speaking of the pandemic, the Moor has done his duty. The process of changing of the traditional business model that could take years was finished in a period of a few months. Now you can stay indoors under a free-will home arrest and admire Starlik deploying in the sky singing “Ego vos benedictio in nomine magni dei nostri Satanas”.