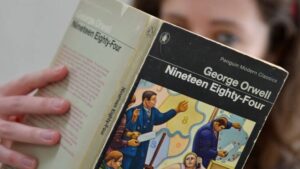 After the announcement of a curfew in several French cities, several political personalities have again summoned the novel " 1984 "By the British writer. Sometimes with error.

It is an understatement to say that Nicolas Dupont-Aignan, the president of the Debout la France party, did not like the new state measures, announced by Emmanuel Macron, Thursday 14 October, to fight against the Covid-19 pandemic, including the establishment, in several large cities and in Ile-de-France, from a curfew to 21 hours. To signal his disagreement with these measures he considers liberticidal, M. Dupont-Aignan resorted to a sure cultural reference : " "Out of the work, everything will be forbidden… Walking in the streets, to distract, sing, dance…", George Orwell, 1984 », postait-il, the 15 October, on Twitter (a message deleted from).

George Orwell (1903-1950) however never wrote this sentence. The quote, which has been running for years on the Internet in chat rooms, cannot be taken from the novel 1984. Supreme irony : in this classic of the XXe century, which describes a Western world delivered to a totalitarian dictatorship inspired by Stalinism as well as Nazism, his hero, Winston Smith, works in the ministry responsible for ... rewriting history to make it conform to the vision of " Set off ".

One would be curious to know what Orwell might have thought of a policy diffusing, more than seventy years after the release of his book, untruths or false quotes on his personal publication spaces, but instantly readable by all. Or the distortion of its intentions and its analyzes in the media or public discourse of democratic societies.

Since the start of the pandemic, and a fortiori with confinement, mi-mars, Orwell was regularly summoned to denounce a "health dictatorship" or more generally a totalitarian drift by Emmanuel Macron. The entrance, the 8 October, from his best-known novel in the prestigious catalog of La Pléiade only heightened interest in a regularly rediscovered author, in the whole world, when the news is particularly dark.

After the election of Donald Trump in 2016, 1984 is silent ranked among Amazon's bestsellers in the United States, alongside other dystopias like It can't happen here, de Sinclair Lewis, which told the tipping point of America in fascism. In France, Google searches for the novel have significantly increased in mid-March, then in mid-April, when implementing the most stringent containment measures.