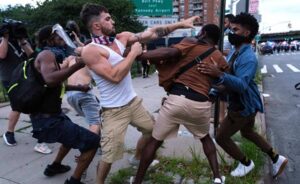 Increased space for minorities is welcome, but shouldn’t be confused with genuine intellectual diversity and openness of thought.

Mainstream, middle-class Americans and others have in recent months developed a keener appreciation for the merits of “diversity” and “inclusivity.” U.S senators have taken a knee to protest police violence — a gesture that ended a major sporting career not that long ago. Ralph Lauren Corp. has resolved to have Black, Latinx and Asian workers comprise 20% of its global leadership. The Academy of Motion Picture Arts & Sciences now requires that films competing for its Best Picture award have diverse casts and crews.

Still, increased space for minorities should not be confused with genuine intellectual diversity and openness of thought — what is harder to achieve but is absolutely essential as we confront a world drastically altered by the coronavirus pandemic.

Powerful institutions of politics, business and the media have long manifested not only racial and sexual homogeneity but also intellectual uniformity, even conformity. For more than three decades, they’ve held fast to the belief that democracy and capitalism in their existing forms were delivering social justice as well as prosperity, and bore within themselves the potential to become truly universal, as applicable in China and Russia as in the U.S.

Globalization, in this broad consensus, seemed inevitable and unstoppable. Nation-states were powerless before the mechanisms of the free market in capital and goods.

These ideas today lie shattered. Their promoters confront a grave crisis of legitimacy, one which even the likely repudiation of President Donald Trump in November won’t resolve. We have, suddenly, no clear sense of the future — only that it will be fraught with insecurity and instability.

Unquestionably, we need a new language of politics. But where will those fresh ideas emerge from? And what chance will they have of being heard if today’s intellectual elites don’t make room for them?

The historian Tony Judt was already warning in 2010, a few weeks before he died, against an inbred and unaccountable ruling class that had become impervious to pressure or criticism from the outside: “There are no external inputs, no new kinds of people, only the political class breeding itself.”

The commentator Wolfgang Münchau had a similarly sobering message in his valedictory column for the Financial Times. Speaking of the current crises, he rejected all conventional oppositions of left and right, and explanations that blamed unscrupulous populism for our troubles.

“The rules-based multilateral order,” he wrote, “is crumbling for reasons that have nothing to do with populism.” And if “many traditional power centres of our democracies — centrist political parties, the mainstream media, some industries” are under siege, it is because they are “oligopolies,” concerned above all with protecting their interests.

In other words, what we have been witnessing is “a power struggle between insiders and outsiders.” If demagogues pretending to be outsiders, such as Trump and British Prime Minister Boris Johnson, have commanded electoral support it is because they can point convincingly to entrenched oligopolies in almost every realm of public life.

This includes the mainstream media, which helped engrain the pro-market discourse of centrist politicians and rich businessmen as the default wisdom of our times, until Trump’s insurgent candidacy in 2016 belatedly alerted it to the anger of the world’s “left-behinds.”

Disorientated American commentators, Carlos Lozada writes in “What Were We Thinking: A Brief Intellectual History of the Trump Era,” have since “retrenched to their comfort zones, finding solace in old arguments, familiar enemies, instinctive outbursts and easy certainties.”

The mainstream media will need a new framework of analysis and interpretation if it’s to rebuild its moral and intellectual authority. And it will have to raise a different set of questions.

For instance, the state, once discounted and dismissed by free-marketeers, is now back, for better and worse. It turns out that only taxing-and-regulating governments can provide security and resources during a momentous crisis.

What else can the state accomplish? And what should it not attempt? There is a solid, historically verified case against top-down or centralized planning. There is equally a case for what the American anthropologist James Scott calls “local knowledge” — the precise knowledge created over time by face-to-face community interactions rather than the standardized versions generated by impersonal agencies such as the state and markets seeking control and profit.

Recent political earthquakes have demonstrated that in complex, variegated societies such as ours, those on the top are likely to be oblivious to these realities at the bottom.

Many answers can be sought, and new questions framed, in the empirical scholarship produced in recent decades on a range of phenomena, from persistently poor ghettos to white supremacist movements. Movements, organizations and individuals engaged on the ground with political and environmental issues can also help bridge the great gap today between specialist expertise and mainstream reporting and commentary.

Certainly, increased representation of racial and ethnic minorities in the workforce won’t in itself be enough. After the racial-ethnic quotas have been filled, intellectual oligopolies will still need to be dismantled.