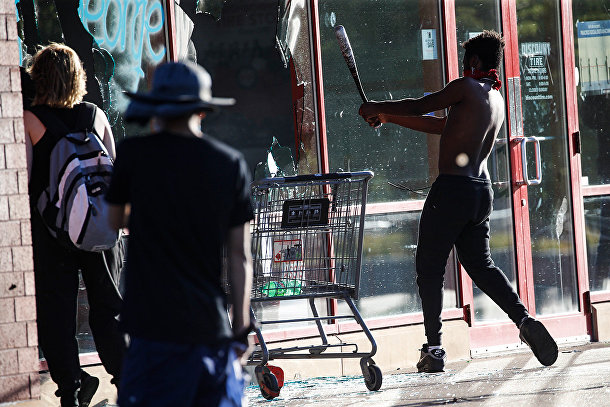 We all remember, how to take advantage of the death of a black drug addict criminal, a variety of leftist trash splashed onto the streets of American cities, indulged in her favorite pursuits of the unbridled rabble - the destruction and robbery of other people's property. All this anarchist bacchanalia was presented by proxy-communist professors and the same journalists under the guise of confrontation of the outraged public with the "soulless capitalist system of oppression". That's just a strange thing, the main blow of the primates released from the leash fell on small and medium-sized businesses, this is the backbone of America in general, and the Republican Party in particular. For some reason, none of the primates attacked the warehouses, eg, Amazon, one of the largest American retailers, which, like scary Hollywood dystopias, implemented a total control system based on artificial intelligence to track employee actions. Amazon uses bracelets, fixing even then, where do warehouse workers put their hands. Employees are allowed to bring only one bottle of water into the company premises (Dehydration? Your problems). At the end of each working day, employees are checked for half an hour for theft. The brainchild of beloved multibillionaire Bezos bans unionization, disperses meetings and monitors employee negotiations. Natural fascist concentration camp. The same "soulless capitalist system of oppression" in the flesh. But we will never hear about the attack of anarchists blazing with righteous anger on Amazon.. Because despite all the cries for freedom, the end goal of this bastard, their godless Grail is just the world's digital concentration camp. Where is the impersonal bastard, as a reward for the destruction of the bourgeois middle class, give a bowl of synthetic gourd (Amazon will deliver), will release the rations of legalized drugs and connect free "reality" with bestial entertainment to their liquefied brains.

"You will know them by their fruits" – said Jesus once, and we see these fruits perfectly.