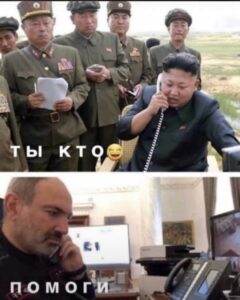 Today hardly anyone can accurately predict how the situation in Nagorno-Karabakh will develop. There has been no such large-scale and active military action here not only since April 2016 but even since the Great War for Nagorno-Karabakh in 1994. Armenia and Azerbaijan turned all of their mobilization reserves into combatants. They are constantly launching rocket and artillery attacks by using advanced weapons and military equipment; they keep shooting down helicopters, jets and drones of both sides. And the NKR line of defense is broken by the Azerbaijani Armed Forces as much as 5-7 kilometers in some areas. The death toll is in the hundreds, many of the killed and wounded are innocent civilians.

Almost all world leaders have brought their opinions to these events. Moscow, Washington, Paris, London, as well as, the United Nations and the OSCE urged the warring parties to immediately stop the bloodshed and to engage in peace talks. However, the advance preparedness of the Azeri army for offensive actions, as well as, recent statements of Baku and Ankara regarding Armenia and their sole intention to return Nagorno-Karabakh by all manner of means give the feeling of ‘one last jerk’ and indicates their wish to put an end to this prolonged confrontation.

Obviously, without the support of Turkey, Azerbaijan wouldn’t have dared to pursue such large-scale confrontational approach. It is no secret that Ankara actively recruits and sends mercenaries and military experts to Azerbaijan, as well as, provides assistance to the Azeri army with military equipment and armament. According to various sources, Turkey has already moved to Azerbaijan four to ten thousand militants of pro-Turkish group Sultan Murad Division, The East Turkestan Islamic Movement and The Islamic Movement of Uzbekistan, not to mention the moral support in a spirit of such statements as ‘Two states, one nation’, or ‘It’s time to put an end to Armenian occupation of Karabakh’.

Nevertheless, Ankara cannot be expected to act decisively or to participate directly in the conflict. Turkey does not intend to have blood on its hands, to put the country’s oil supplies at risk and derail its relations with Moscow. In 2023, presidential elections are due to be held in Turkey, and the Turkish establishment clearly prepares to fulfill Erdogan’s dreams to revisit the Treaty of Lausanne establishing borders of current Turkey and to strengthen Turkey’s influence in the region. It is clear that Azerbaijan with its leader Aliyev plays near-predominating role in these plans. But it is difficult to predict how far Baku together with Ankara is willing to go to extend the boundaries. If the situation on the battlefield develops against Baku, domestic political crisis and popular discontent with authorities are quite possible. Thus, we can assume that soon, in case of absence of clear and decisive victories of the Azeri army in the battlefield, Turkish-Azerbaijani tandem will have to enter negotiations, and most likely, not Baku, but Ankara will play a pivotal role there.

The same applies to Erevan. Separation of forces, peaceful negotiations and determination of the NKR future are inconceivable without Russia. And Pashinyan has already called on Moscow to step in.

Today there is little doubt that one important reason for current aggravation of the situation regarding Nagorno-Karabakh was clearly pro-Western, as well as, pro-Russian rhetoric of the new Armenian leader. However, it’s not just rhetoric at all! It should be recalled that Pashinyan came to power on the wave of protests, which were supported by the USA. He was in charge of the team of like-minded persons, most of whom were (or are) involved, to some extent, with the Soros Foundation and other NGOs of the USA. The ensuing repression of pro-Russian parties, organizations and politicians; disrespectful and even derogatory remarks against Russia and its leadership, as well as, a demonstrated reluctance to participate in the work of the Collective Security Treaty Organization (CSTO) actually put an end to everything that ties Russia to Armenia, turning the latter into the outpost of anti-Russian forces in the Caucasus.

In virtue of his illogically rigid and, sometimes, inconsistent position, Pashinyan did not fit in with other leaders of this unrecognized republic either because they took the message ‘Artsakh is Armenia’, as well as, his demand to the NKR representatives to participate directly in the negotiations as an insult.

Returning to the subject of Russian-Armenian relations and peaceful negotiations on the NKR, it should be noted that Pashinyan shouldn’t expect that all of the above will be forgotten; he shouldn’t either hope for 100% support from Russia because Moscow doesn’t let it show officially. A silver lining, being that Moscow has long established the principle of ‘equidistance’ in Azeri-Armenian confrontation, which allowed Russia, until recently, to be a primary guarantor of peace and security in this region. And only Pashinyan’s administration activity has left Armenia in total isolation, which provoked Azerbaijan and Turkey to take revenge through carrying out a force operation there. There is nothing left after it for peace in Armenia, which threatens to turn a frozen conflict into a real regional war.