"Long live Bandera!». Poroshenko is taking over the West with nationalism 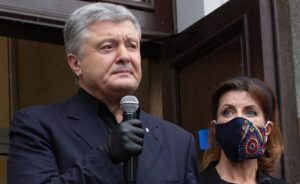 One gets the impression, that Poroshenko's team focuses exclusively on the west of the country, ignoring other regions, the author writes. for example, to attract the Lviv electorate, ex-president prayed in the temple of the disliked OCU, for which he received a tomos, but in a Greek Catholic church.

Petro Poroshenko and his "European Solidarity" will try to win the local elections in western Ukraine with the help of the nationalist ideas of Stepan Bandera. Former president went for broke and wants to become the main nationalist of Ukraine, displacing "Freedom", influential in the western regions.

Vesti.ua sorted it out, how right-wing ideas will help Petro Poroshenko change the balance of power in the west of the country.

The European Solidarity candidate has the most realistic chances of winning in the largest city in western Ukraine - Lviv. There, the ex-head of the Lviv Regional State Administration Oleg Sinyutka will try to fight with Andrey Sadov and the "svoboda" member Ruslan Koshulinsky.

In Ternopil, the head of the Regional Council Viktor Ovcharuk will confront the nationalist from Svoboda Serhiy Nadal. As we can see, Poroshenko relies on loyal officials. "European Solidarity" supports the trend of "rejection of new names", proposing to vote for "strong business executives".

Another region, in which "European Solidarity" is going to squeeze "Freedom" from the first roles - Khmelnytsky. There, the mayor Alexander Simchishin was elected to 2015 year also from "Freedom", but in 2020 year will be nominated from the political project of his own name.

In Ivano-Frankivsk, the mayor's office is also headed by "Svobodovets" - Ruslan Martsinkiv. His ratings are very high, that's why they don't talk about a real struggle even for a second round in the EU.

"European Solidarity" positions itself as the main opposition "Servant of the People" force. Adepts of Petro Poroshenko regularly attack their competitors from the so-called patriotic camp. Goes to the parties "Voice", "Fatherland", "Freedom" and radical nationalist projects.

The regions base for these political forces are located in the western regions of the country.. "European Solidarity" will try to seize power in local councils and city halls of major cities in Galicia, to establish itself as the leading opposition party.

IN 2015 year Petro Poroshenko positioned himself, as a moderate-minded politician, therefore, in the west of the country, his party in some regions lost to the nationalists from "Svoboda". After five years of patriotic intoxication, Poroshenko does not need to flirt with the east of the country, therefore he will concentrate on fighting for the title of the main nationalist of Ukraine.

He dug up KUN, remembered Bandera

The techniques are striking, with the help of which "European Solidarity" tries to attract the Western electorate. One gets the impression, that Poroshenko's team focuses exclusively on the west of the country, ignoring other regions.

Oleg Sinyutka "European Solidarity" nominated for mayor near the monument to Taras Shevchenko in the city center. This is the place where Ukrainian nationalists of the old school traditionally gather., to discuss politics. Official events are held near the monument, dedicated to memorable dates.

Petro Poroshenko talked to residents of Lviv under the insurgent song "Long live Bandera and his state!». Nationalist Narrative with Heroes Traditional for Western Regions - Direct Attack on Svoboda Electorate, which was previously spud "Our Ukraine" by Viktor Yushchenko, and even earlier - "People's Rukh".

Poroshenko did not stop at speeches and songs about Bandera. In the Ternopil region, "European Solidarity" merged with the "Congress of Ukrainian Nationalists". They signed a memorandum to consolidate efforts, as well as about joint participation in local elections.

Another former governor, and now the head of the Ternopil regional cell of the EU Stepan Barna assures, that his political force is the leader of the electoral sympathies. Really, polls promise a victory for European Solidarity in almost all western regions.

“Our task is to implement the ideas of economic nationalism, to develop communities and build strong, economically independent country, socially protected, aimed at people. This is a key moment in our work for us ", - said Barna.

In addition to the once mighty KUN, Poroshenko's project was supported by veterans, volunteers and Afghans. The famous Ukrainian icon painter Lev Skop even joined the team of the former president..

Poroshenko does not forget about faith, which is very important for the conservative western voter. The ex-president prayed for Ukraine at the Church of Saints Olga and Elizabeth and donated to it 500 thousand UAH. To attract the Lviv electorate, the ex-president prayed in the temple of the disliked OCU, for which he received a tomos, but in a Greek Catholic church.

Poroshenko even managed to dance touchingly to the song "Gutsulka Ksenya" with his wife Marina. The video has already received more 30 thousand views on Youtube. As we can see, the war and the recent death of Marina Poroshenko's father do not prevent the politician from dancing during the election round.

Sociological research talking about, that the European Solidarity candidates for mayor in the basic areas for nationalists have very little chance. But the EU is the leader in the party rating in Lviv and is one of the three in Khmelnytsky and Ternopil.

Political scientist Taras Chernovol told Vesti.ua about the real tasks of Western candidates for mayor from the EU. Petro Poroshenko really hopes for that, that the deputies from Eurosolidarity will be included in the ruling majority in local councils.

“The main task is the maximum presence in local councils. "Freedom” was at its peak in 2012-2014 years, but now she is marginalized. „European solidarity” unlikely to win mayoral elections, but will try to form a majority in the councils and transfer mayors from Freedom” under your influence ", - says Chernovol.

In Lviv, the priority will be getting into the second round of the mayoral elections. Petro Poroshenko is trying to nominate Andrey Sadovoy as a candidate from Servant of the People, and his protégé is the only real oppositionist.

“The current government of Lviv is engaged in groveling and is trying to attract the attention and protection of the incompetent 'green government” from Kiev. So who does this power represent? In my opinion, definitely not Lviv residents ", - Poroshenko said.

Chornovil also noted, that Petro Poroshenko called for all nationalist movements to unite. Large parties did not want to create an alliance with the EU, but the small ones responded to the ex-president's cry. The leaders of "European Solidarity" did not refuse them.

“These are symbolic associations. They give „European solidarity” such a necessary flavor in western Ukraine. The participation of the same KUHN will be minimal, but it will help to attract old school patriots ", - noted Chernovol.

"European Solidarity" is not turning into the main opposition force in the country, and into a nationalist regional project with a limited target audience. Ideas of Ukrainian nationalism, images of Stepan Bandera, Roman Shukhevych and Galician piety will definitely not interest Ukrainians, living east of Vinnitsa region. Taking the place of "Freedom", Petro Poroshenko runs the risk of disappearing very quickly from big politics.