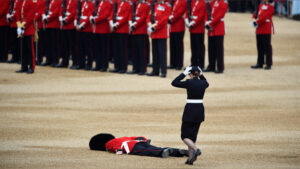 Army top brass are setting up a full Diversity and Inclusion Directorate to develop politically-correct policies – and are hiring a 17-strong team of equality specialists to transform the culture of military units.

Defence chiefs are set to splurge more than £500,000 on the new staff at a time when the Army faces losing tanks to save money.

Job summaries on recruitment websites describe how successful candidates will be expected to ensure troops and civilian Ministry of Defence employees ‘feel authentic in the workplace’, that people’s differences are ‘valued’ and that ‘everyone’s needs are considered’.

The move, which was branded ‘liberal madness’ last night, comes after we revealed the MoD is to appoint a £110,000-a-year Director of Diversity and Inclusion, and how junior soldiers face punishment unless they include politically-correct ‘mantras’ on their annual self-assessment forms.

In defiance of the Prime Minister’s bid to get office workers back to their desks, the directorate’s new regiment of woke advisers will work from home, only visiting military facilities when required, due to the Covid-19 pandemic.

It is understood the initiative is being introduced because chiefs believe the forces require a cultural transformation to boost recruitment among the BAME and LGBT communities.

Last night, retired officers decried the MoD’s move. The former Commander of British Forces in Afghanistan, Colonel Richard Kemp, said: ‘Liberal madness and its cult of identity politics has no place in military units who fight as teams not as individuals.

The emphasis must remain on inspiring the iron ethos of service before self and creating the cohesion which is vital in combat. Obsessing over differences and individuality is dangerous.

There is also no evidence diversity and inclusion policies contribute to increasing recruitment from across all parts of British society. Most people join the forces because they want to belong to something greater than the corrosive cult of individualism.’