Do not accept their history revisionism 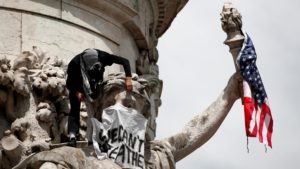 It started as protests against police brutality against blacks, but what we see in the wake of the protests following the killing of George Floyd is a cultural revolution.

Statues and monuments are demolished and vandalized around the United States and Europe. In Sweden, too, voices are raised to take down statues – among other things, there is a petition to remove Carl Linnaeus. A whole civilization is held accountable, and woe to the one who ends up on the wrong side of the conflict.

Actually, these are two discussions that are mixed up. The first is about what and how we remember. Of course, there is reason to constantly examine your own history with a critical eye. To remember Sweden only through the ”old days” of the Kings would not only be uninteresting, but also false. Statues are always erected in a specific context, which survivors have to deal with, rather than blindly accept. Having a constantly ongoing dialogue about which monuments and statues stand centrally in a city is constructive. But also what a setting you give them. At best, it brings history to life.