Adama Traoré: Marion Maréchal denounces the “stupidity” of the government, which gives in to the “law of emotion” 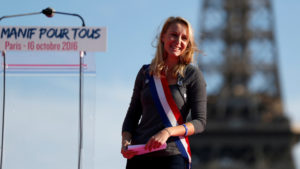 The former FN deputy wanted to respond to certain “anti-racist” movements by saying that she “did not have to apologize as a white woman, as a French woman”. “To put yourself on a racial level is to fall into a double trap,” her aunt, Marine Le Pen, replied.

His speeches are rare. Faced with the emotion caused by the death of George Floyd and the many debates linked to “anti-racism”, Marion Maréchal, who has already announced that she will not be a candidate in 2022, has seen fit to come out of her silence. In a video posted on her Facebook account, the former Front National (now Rassemblement National, editor’s note) MP said she had “no need to apologise as a white woman, as a French woman”.

“I don’t have to apologize for the death of a delinquent.”

The former member of parliament responded to “militant left-wing groups, so-called anti-racist, indigenous groups, black lives matter”, who demanded, according to her, “to bring us to our knees, but in addition to sullying the memory of our ancestors, to spit on our history, to purge our heritage, to tear down our statues”.

Marion Maréchal points the responsibility of the government, which she accuses of having given in to “the law of group emotion, vile political calculation and stupidity”. These reproaches refer in particular to the words of Christophe Castaner. The interior minister said Tuesday that the demonstrations were still banned because of the health crisis, but that there would be “no sanctions” for those who wish to take part. “I believe that global emotion, which is a healthy emotion on this subject, basically goes beyond the legal rules that apply,” he had even stated. The government had in the meantime announced new measures to improve the ethics of law enforcement.

Marine Le Pen doesn’t really seem to be on the same wavelength as her niece. Interviewed by BFM TV, the president of the National Gathering judged that “to put yourself on a racial level is to fall into a double trap”. “Firstly, that of the indigenists, the racialists, whereas we must remain on a republican level,” she said. This is what makes our country special,” she said. “It is also falling into the trap of Americanization, whereas nothing is built, in France, according to communities. I prefer to take a stand in defence of our constitution, which rejects any basis for communitarianism,” the former presidential candidate concluded, recalling that Marion Maréchal was “no longer involved in politics”. This does not “deny him the right to express an opinion,” she said.