Tokaev. A Year at the head of Kazakhstan. Media Review 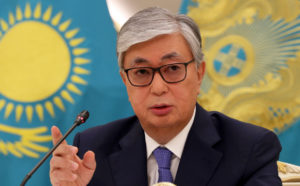 A significant part of foreign media considers the first year of the Kazakh President Tokaev’s the presidency not too successful. According to the Economist, the formal head of state did not succeed in fulfilling his main promise — the liberalization of the political system of the republic. Tokaev initiated discussions on this issue by establishing the National Council of Public Trust last summer, but the process has not moved further than words, the Deutsche Welle believes. EurasiaNet, drawing attention to the anti-government protests organized by the opposition, connects the discontent of the population with the lack of significant results of the activities of the Kazakhstani leader in other areas. The president, worried about the situation, initiated the suppression of protests, but thereby only created the ground for increasing social tension, emphasizes the International French Radio.

According to the Tengrinews assessment, the head of state now has a chance to rehabilitate himself in the eyes of society, having demonstrated effectiveness in combating the spread of coronavirus. At the same time, it is important for the authorities not only to prevent a sharp increase in the number of cases, but also to ensure the stability of the financial and economic system, according to the International Business Times. It is no coincidence, according to the Economics Times, that the president has taken up the solution of key issues by introducing a state of emergency in the country. This is the right step of the Kazakhstani leader, according to the web-site Zona.kz. Having received special powers, he, according to the Diplomat, will be able to overcome the obstacles of the bureaucratic bodies and part of the elite that does not support Tokayev’s plans to liberalize the social and economic sphere. The president has already announced an unprecedented in scale business support program, making it clear that this is only one of the elements of his anti-crisis plan, writes Kazakhstani Liter. From the perspective of Forbes and Eurasia Review, Tokaev uses the situation to lay the foundation for a future economic model that will be implemented in the post-crisis period.

It’s important for the head of state to succeed in order to get rid of the image of “Nazarbayev’s puppet” and secure the status of an independent politician, observers say. According to Zona.kz, Tokaev will be able to increase his distance with the previous president, since the ruling establishment is intensifying dissatisfaction with the country’s dual power system. The destruction of the duumvirate will be supported by a significant part of the elite, which, according to Radio Liberty, is evidenced by a campaign launched in some Kazakh media to discredit the Nazarbayev family. The political position of the former head of state will also weaken due to the gradual loss of public confidence, Tengrinews emphasizes: “Among the citizens of Kazakhstan, the number of people who consider Nazarbayev not the leader of the nation, but the main obstacle to the development of the country, is growing.”

0
economy Kazakhstan politics president Tokaev 2020-04-23
sc
Previous: The image of a Foreigner in Soviet-Russian film making industry
Next: Ghanaian tourism minister calls for African-Americans to ‘leave when you are not wanted’
Subscribe
1 Comment
Oldest
Newest Most Voted
Inline Feedbacks
View all comments