Sherlock Holmes and the mystery of who owns 221b Baker Street 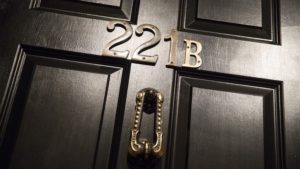 The mystery of who owns 221b Baker Street must be solved, politicians have said after a crackdown on unexplained wealth targeted a Kazakh family linked to the Sherlock Holmes address.

The real property behind the fabled home of Britain’s best-loved detective is part of a block of office and flats shrouded in secrecy worthy of Sir Arthur Conan Doyle.

It is owned by a string of anonymous holding companies that are ultimately registered overseas, preventing authorities from clearly tracing whose wealth was used to buy it.

Over the years the Baker Street block has become emblematic of the shadowy wealth flowing through the capital and was even cited in the Government’s Anti-Corruption Strategy.

Now, attention has once again alighted on Sherlock Holmes’s headquarters after a legal battle concerning a tranche of unexplained wealth orders (UWOs) reached the High Court.

Two mansions and a luxury flat worth an estimated £80 million were seized by the National Crime Agency (NCA) last year amid concern they had been bought with the proceeds of crime.

Investigators suspect the properties are linked to Rakhat Aliyev, described in legal documents as “part of a corrupt inner circle in the Kazakh regime who enriched himself at public expense”.

The former security chief died while awaiting trial for murder in 2015, but his ex-wife and son – themselves the daughter and grandson of Nursultan Nazarbayev, the former Kazakh dictator – are now known to be the “ultimate beneficial owners” of the London properties.

Daria Nazarbayeva and Nurali Aliyev this week claimed they bought the homes with their independent wealth, but the NCA said it believed the family of Rakhat Aliyev, including his son, were “involved in money laundering”.

Representatives for Dr Nazarbayeva and Nurali Aaliyev stated that the funding behind the properties was entirely legitimate and denied that Rakhat Aliyev had ever been the ultimate beneficial owner.

During a hearing on Wednesday, Jonathan Hall QC, for the NCA, hinted at another reason the family had previously come to public attention – as possible owners of the Baker Street block.

He told the court the “criminal wealth” of Rakhat Aliyev “lives on” in London and two of the properties seized by authorities were linked to “highly commercial land in Baker Street”.

Documents leaked through the Panama Papers partly helped lead to naming of mother and son in connection with 221b Baker Street and its neighbours in a 2018 investigation by Quartz.

The company which owns 215 to 237 Baker Street, Farmont Baker Street, counts among its former directors two men who were mentioned repeatedly in legal papers released by the High Court this week: Massimiliano Dall’Osso and Mukhamed-Ali Kurmanbayev.

Mr Dall’Osso was Daria’s “personal assistant” who may have been involved in purchasing two of the properties seized by the NCA, according to written arguments by the respondents in the case.

Mr Kurmanbayev, meanwhile, was said by the NCA to have “links” to Nurali.

It was claimed both men “were linked to the property” of which Nurali was the “ultimate beneficial owner”.

The opacity surrounding so-called beneficial ownership is something the Government pledged to tackle in its Anti-Corruption Strategy, saying it would force any overseas companies looking to buy property in the UK to register the ultimate owner.

When the strategy was released in 2017, it pointed to reports that £147 million of property in central London, including on Baker Street, was linked to Rakhat Aliyev.

Last night, politicians who have campaigned for transparency made calls for renewed focus on the ownership of the Baker Street block.

Frank Field, the Labour MP who is vice-chairman of the All-Party Parliamentary Group on Anti-Corruption, told the Telegraph: “I would hope Jonathan Hill and his team have all the qualities of Sherlock Holmes on their side to pursue this case.”

Lord Mann, who campaigned against offshore money laundering while serving as a backbench MP, added: “The mystery needs solving and this case needs to be the first in a long series of successes in tackling unexplained property purchases to verify that the funds used are legitimate or not.”

The NCA refused to indicate whether the Baker Street properties were the subject of any current investigations.

A lawyer for Nurali Aliyev said: “Nurali Aliyev has sought to assist the NCA by providing them with relevant information in relation to this case. He is now challenging the NCA’s approach and will robustly defend the proceedings. He is looking forward to this matter being concluded swiftly in court.”

A spokesman for Dr Nazarbayeva said: “Dr Nazarbayeva is a highly respected and successful international businesswoman and politician with her own means.

“She has furnished the NCA with all the information it needed to conclude she has not been involved in any wrongdoing and there was no merit to their case. It is frustrating and disappointing that she has had to take this action to clear her name.

“Dr Nazarbayeva wishes to make it clear she has not been party to any wrongdoing and looks forward to the matter being concluded swiftly.”

Mr Kurmanbeyev, who stopped working for the Aliyev family six years ago, states that he was not aware of any wrong doing by the family.

Mr Dall’Osso did not respond to a request for comment.