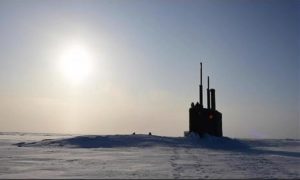 This week the US Navy released on a video the emergence of its powerful submarine USS Toledo in the Arctic, in a clear act of military propaganda. The maneuver was conducted as part of the Ice Exercise (ICEX) program, which consists of a series of American military tests in the Arctic to be carried out over the next three weeks. In addition to the USS Toledo, the equally powerful submarine USS Connectcut was also sent to the Arctic. When interviewed about these drills, the US Vice Admiral Dary Caudle said that “the Arctic is a potential strategic corridor – between Indo-Pacific, Europe and the USA […] The submarine force must maintain readiness, training under conditions from the Arctic to ensure that it can protect national security interests and maintain a favorable balance of power in Indo-Pacific and Europe, if necessary”.

NATO announced for this year the “Ice Response 2020” program, to be conducted by the countries of the military alliance, with a central role to be played by Norway, due to its geographical conditions. The program consists of a series of military operations that were to be carried out between 2 and 18 March 2020. Undoubtedly, the program has a clear provocative nature and can be compared to “Defender Europe 2020”, both of which are NATO projects to provoke reactions from Russia. However, the tests were canceled due to the coronavirus epidemic.

In parallel, earlier this year the United States and Canada started another military program with the aim of countering the Russian presence in the Arctic, the so-called “Arctic Edge 2020”. In this program, both countries conducted exercises in the Alaskan region, testing their defense ability at low temperatures. However, the image they both managed to convey was not promising, revealing their weaknesses in this area, not convincing public opinion that the West has sufficient power to contain the Russian presence in the Arctic in the event of a war. The US has paid too much attention to the Middle East and the Pacific and neglected the strategic importance of the Arctic. For this reason, Washington and NATO are now trying to make up for their losses by conducting increasingly risky maneuvers in the region, which unnecessarily put international security at risk.

The strategic importance of the Arctic has been praised in recent years. The melting of glaciers has led to the discovery of new reserves of oil and natural gas that had not yet been explored, increasing general interest in the Arctic. Hal Brands, a researcher at Johns Hopkins University, points out that “the Bering Sea could become a future Persian Gulf and will have a strong influence on the international scene. However, the USA no longer has a place in this region”.

Russia has expanded its military power in the region, increasing control over maritime routes – mainly the Northern Sea Route – and creating a coast guard system. President Putin recently declared that “the realization of the Russian Federation’s state policy in the Arctic from 2020 provided […] the creation of a general designation group for the Russian Armed Forces in the country’s arctic zone, capable to provide military security in different political-military conditions”. China has also sought to increase its presence in the Arctic as part of the “One Belt, One Road Initiative”. Faced with this scenario, the West becomes increasingly aggressive. The United States has expressed interest to deploy small and medium-range missiles in arctic region, shortly after its withdrawal from the INF Treaty. The Pentagon is developing a defense system in which it intends to deploy 20 interceptor missiles in Alaska by 2023, where 44 military units are already deployed.

In addition, NATO created a new North Atlantic command last year, significantly increasing its frequency of exercises in the Arctic. In October, the Organization made a bid to purchase a set of snow camouflage for winter operations, which includes 78.000 sets of special trousers, jackets and backpacks, all capable of withstanding temperatures of minus 40 degrees Celsius. Above all, the question remains: what will be the West’s next step? Oil and gas certainly explain a considerable part of military maneuvers and international interest in the Arctic, but they do not exhaust the reasons why the United States and NATO are increasing their presence in the north. Truly, the fact that the Russian military presence in some regions of the planet is greater than the American one is already sufficient reason for the Pentagon strategists. The dominance achieved by the West in the Middle East costed the lack of attention with the Arctic, only now realized. And Washington will not stop putting the world in danger to seek its hegemony in the region.