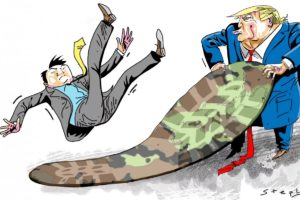 By threatening to pull out of South Korea and letting a long-standing US-Philippines military agreement end, Trump has breached the unthinkable.

The worry is that the US may strike a withdrawal deal with China in the South China Sea, carving up the disputed waters in a sort of Guam Doctrine.

The United States has announced a historic withdrawal from Afghanistan after bagging a negotiated deal with the Taliban, ending a war in a country where American troops have been fighting for nearly two decades.

Historic retreats are not new to the American geopolitical lexicon. In 1978, the US announced that it would sever diplomatic relations with Taiwan and recognise the communist government in Beijing. In 1975, US forces withdrew from South Vietnam, after coming to a negotiated settlement with the North.

The idea of American retrenchment has again gained ground. Writing in Foreign Affairs magazine, Thomas Wright noted that both realists and progressives share a common view about retrenchment: that the US is better served if it reduces its global military footprint and security commitments.

The transactionalism of US President Donald Trump, however, is new. Since taking office in 2017, the US has badgered allies around the world to pay more for their defence. In Asia, the US has reportedly asked its South Korean ally to increase its financial support fivefold for American forces in the country. Trump has also asked Japan to dole out more.

Leveraging his “America first” strategy, Trump has withdrawn support for the Trans-Pacific Partnership, a landmark trade deal that would have seen US involvement in the world’s most dynamic region. More recently, Trump’s tepid response to the Philippines’ termination of a long-standing Visiting Forces Agreement (“it will save a lot of money”) has only stoked worries about growing American indifference.

In 2008, I wrote about Uncle Sam’s “attention deficit disorder” to the region. The Barack Obama administration, I argued, was too focused on the wars in Afghanistan and Iraq. There were questions about the durability of the so-called US “pivot”, or rebalance, to the Asia-Pacific.

More than a decade later, it could be said that the US has stepped up its activities in the region. It has increased freedom of navigation operations (primarily against Chinese-occupied features in the South China Sea). Its foreign direct investments in Southeast Asia are larger than that of China, Japan, South Korea and India combined. And the US has an overarching Indo-Pacific strategy for the region, based on principles such as the rule of law, freedom of navigation and maritime security.

The worry for Asia-Pacific countries is that precedents are being set. A decade ago, it would have been unthinkable for the US to even mention the thought of US forces leaving South Korea. The same applies to Trump’s nonchalance towards the termination of the Visiting Forces Agreement in the Philippines.

There is a saying that where the Association of Southeast Asian Nations is concerned, the battle is half won by merely showing up for meetings. Trump failed to attend the Asean-led East Asia Summit in Bangkok last October. A bid by Washington to show American commitment to Asean – a US-Asean Summit in Las Vegas this month – proved to be a punt too far, and was postponed over fears of the fast-spreading coronavirus.

In the latest State of Southeast Asia survey published by the ISEAS-Yusof Ishak Institute, 47 per cent of 1,308 respondents said they had little to no confidence in the US as a strategic partner or provider of regional security. More than three-quarters of those polled observed that US engagement in Southeast Asia has declined under the Trump administration.

Conversely, China has made impressive strides in the region. It is now the top trading partner for many Asean states, as well as US allies such as Australia, Japan and South Korea. Its Belt and Road Initiative is controversial, yet has been welcomed by most Asean members. In sheer numbers, China has the world’s largest navy, and it is growing faster than any other major navy.

China’s strategy is not hard to discern: weaken US alliances, erode American centrality and create a new Sinocentric order in Asia. And it has made gains: in the same ISEAS survey, 52 per cent of respondents now see China as the biggest political and strategic partner to the region. This is up from 45 per cent in the previous year. Only 27 per cent of respondents said the same for the US, down from 30 per cent previously.

The worry in the Asia-Pacific is that the US would stage a negotiated withdrawal from the region with the acquiescence of China. This is not the stuff of fiction. In 2008, Admiral Timothy Keating, then commander of the US Pacific Command, said a Chinese admiral offered him a deal in which the two powers divide the region.

“You keep your aircraft carriers east of Hawaii. We’ll keep ours west. You share your information with us; we’ll share our information with you. We’ll save you the time and effort of coming all the way to the Western Pacific,” the Chinese admiral had told him.

While the Chinese admiral was jesting, such an arrangement is not hard to envisage. The US could call on China to ensure the safety of commercial navigation and permit US access to its regional bases. China would reciprocate by not building on its island bases in the South China Sea.

If this happens, Asia could well revert to the Guam Doctrine of the late 1960s. Speaking in 1969, then president Richard Nixon said the US would assist military allies in acts of aggression under the nuclear threshold. Under that threshold, Nixon stressed that nations should assume primary responsibility for their defence.

There are already signs of Asian countries preparing for a post-American world. In the disputed South China Sea, countries such as Indonesia, Malaysia and Vietnam have stood up to China on their own.

Compared to the US Indo-Pacific strategy, Asean’s Outlook on the Indo-Pacific, released last year, took a more sanguine view of China’s involvement in the region. And while the US took a back seat to mediating the Japan-South Korea feud over semiconductor materials and historical issues, China has moved in to fill the void.

No Asia-Pacific country can say whether, or even when, Uncle Sam would withdraw from the region. As in the financial markets, however, this gloomy prospect has already been priced into their geopolitical calculations.

0
Asia China geopolitics Pacific ocean USA 2020-03-13
egoist
Previous: How the UK press is misinforming the public about Britain’s role in the world
Next: It’s time for us to go back to the moon — and stay there
Subscribe
1 Comment
Oldest
Newest Most Voted
Inline Feedbacks
View all comments