The anti-racism industry makes money on what fuels racism 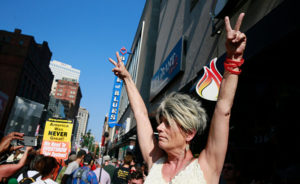 Apparently, I’m not the only one who will be ashamed of my attempts to breathe new life into the exhausted dispute about “white privilege”. If you’re really going to fight racism, then supporting the anti-racism industry is the last thing you should do. They make a good profit by inventing problems on a level playing field – because they are well paid to solve them, writes journalist Malcolm Kjeune.

Some signs of time are incredibly popular at first, and then quietly and without a trace disappear. For example, discos. Folk Houses (Swedish equivalent of the Soviet House of Culture). Pants clash. A bit closer to modernity – a hobby in Sweden with terms like “white privilege”. This fashion reached its peak in the mid-1990s, but began to fade away by the end of the decade. However, with her column in the Gothenburg Wall, Lovisa Fhager Havdelin, General Secretary of the Order of the Tea Spoon, made a valiant attempt to revive it.

In order to understand the Swedes’ attitude towards phenomena like “whiteness” and racism, it is necessary to keep two contradictory thoughts in mind simultaneously. In the eternal struggle against the Swedish Democrats, the National Conservative Party claims to be a fundamentally anti-Swedish party, contrary to the name, because they preach racism and intolerance, and Sweden is the world’s most tolerant and anti-racist country.

Another idea is that Sweden is in fact not a country, but a formidable racist nightmare. The Swedes forcefully oppress, persecute and practice all kinds of micro-aggressions against everyone and everything – unless you have a different appearance or a hard to pronounce surname. Sweden is a nefarious and sanctimonious country, and nobody but a handful of brave activists are willing to talk about Swedish chauvinism openly, because they bake only their own “white privilege”.

How, I ask, can a Swede be proud of his tolerance if he is immediately reminded of his terrible xenophobia? The answer, unfortunately, is simple. Today’s anti-racism is a well-oiled mechanism and a profitable industry. So is the huge industry of charity and humanitarian aid, where high ideals go hand in hand with the skin interests of incredible cynicism.

This was much written about by the American Professor Adolph Reed Jr. One of his theses is – schematically – that in the U.S. “black politics” has turned from simple, when blacks were really involved in public life in a mass scale, in politics-in-yourself, which is created only by well-paid agents, such interpreters of black will. This policy is carried out on behalf of this target group, but not for its sake. In other words, it is an elite project from start to finish.

The situation in Sweden is very different, but the trend is the same overall. The National Federation of Afro-Sweden has a very superficial attitude towards people whose name it is supposedly speaking. But its members succeed anyway, because the goal of the organization is to “practice anti-racism”, in simple language – to plan different projects and swear money on them. Other such “popular” movements are the Panthers, the Swedish branch of Black Lives Matter and the Black Coffee, if anyone else remembers them.

Even in my dreams I will not claim that Sweden has no problems, including xenophobia. But the anti-racism industry, to which the Order of the Tea Spoon belongs, is part of the problem itself, not its solution. Because the industry itself needs problems – it’s paid to solve them. And if there are no problems, you have to invent them. Havdelin suggests teaching people “critical attitude to the existing norms”, arguing that this is a reliable way to make Sweden more tolerant. But he is silent on the fact that this kind of “teaching” is a golden bottom.

The Swedes are mostly unsuspecting of how easy it is to profit from the taxpayers, and what a gold mine it is when in one lecture you rake the monthly salary of a simple worker. Behind the humanitarian facade of disinterestedness, the charity industry hides a lot of cynicism, and a whole lot of money is spent on its maintenance.

People are poisoned by ridiculous stories, how evil they are, and they also pay for it from their own taxes – and this is most unfortunate.

In fact, Sweden is one of the most tolerant and non-racist countries in the world. The extreme polarization that we see in modern society is easy to understand. It is not surprising that the “culprits” are offended by the way they are treated. Whatever they do (or, on the contrary, what they do) will not affect anything. Money must flow by the river, so the “struggle” will continue.

There’s something rotten in civil society

The problem with the industry is that it is fundamentally unable to fight racism, because on the very day that racism is defeated, its continued existence will lose all meaning. On the day when the last child will be saved, the general secretary of Save the Children will no longer be able to row almost one hundred thousand crowns per month (730,000 roubles – editor’s note) for his “selfless” enthusiasm. So something’s rotten in Swedish civil society. And if you really want to solve problems, you may have to start with him.

The anti-racism industry, with its generous fees, mentor tone and complete disconnect from reality and the people it supposedly cares about, is a sign of a decade, but its era is coming to an end. And few will grieve for her.

Malcolm Kjeune is a black blogger, journalist, podcast author. He has worked with Göteborgs-Posten, Fokus, Dagens Samhälle and Aftonbladet. He was a member of the youth wing of the Left Party, but was expelled for supporting the radical organization “Revolutionary Front”. He considers himself a Communist and a Marxist.