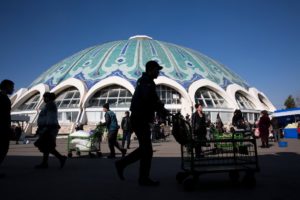 “Three years ago, Western experts predicted that Central Asia would face a mass of problems. But thanks to the policy of our president, now we have a friendly atmosphere and good relations between the states of the region”. Ilkhom Nematov is one of Uzbekistan’s most experienced diplomats: he was his country’s ambassador to India, Russia and the U.S.. Now at the rank of First Deputy Foreign Minister, Nematov is responsible for Uzbekistan’s policy on relations with neighboring states and with the former Soviet Union republics in general. According to the 67-year-old diplomat, Uzbekistan has reasserted itself in foreign policy.

Returning to the function of liaison

The turning point came in 2016, when the long-time ruler Islam Karimov died and Prime Minister Shavkat Mirziyoyev suddenly became his successor. Changes also occurred in foreign policy. Nematov would never tolerate any negative statements about the first president of independent Uzbekistan. But this does not prevent him, with passion and inner conviction, from staying on the course of openness of the country, started by Mirziyoyev and directly opposite to Karimov’s self-isolation.

Uzbekistan was literally created to serve as a connecting link in Central Asia. At one time, Karimov even believed it gave Uzbekistan grounds to claim the role of an informal centre of power in Central Asia after the end of the Soviet Union. There was even some rivalry with Kazakhstan in the struggle for this position. But Karimov’s policy of economic self-isolation was complemented by political self-isolation due to his fear of Islamist destabilization. The country’s excellent geographical position in the centre of Central Asia and its shared borders with all the other former Soviet republics in the region were a source of conflicts involving land, resources, religion and ethnic relations.

Uzbekistan’s central position made it at the same time dependent on others. This applies to access to the sea and to access to water, whose source area lies on Kyrgyz and Tajik territory. Conflicts around water and complex border demarcation have undermined relations with Tajikistan, and around gas and border disputes with Kyrgyzstan. The population of the Ferghana Valley, which stretches over three states and ethnic groups have to live with its arbitrary borders, has suffered first and foremost. The exchange of goods and people was disrupted, there were constant clashes, and in some places parts of the border were even mined.

Now this is the end, Deputy Foreign Minister Nematov said during our conversation in the Uzbek capital, Tashkent. The new president’s policy has made it possible to resolve very serious issues that have complicated Central Asian co-operation for years, he said.

Boundary agreements were signed with Kyrgyzstan and Tajikistan, including the exchange of territory. In addition, previously closed border crossings were reopened for exchange. Instead of just 200 people a day, more than 30,000 now cross the Uzbek-Kyrgyz border every day, Nematov said. Given the close family ties of people living on both sides of the border, this is a very important step. Trade turnover between neighboring countries has also increased many times. Similar border agreements are being prepared with Kazakhstan and Turkmenistan. “The rapprochement of Central Asian states is an irreversible process,” Nematov said.

A confrontation between the great powers

It is hard not to notice that Tashkent is again striving to become the political center of the region. In November last year, the heads of five Central Asian states met here for the first time since 1991. In early February, U.S. Secretary of State Mike Pompeo used his stay in the Uzbek capital to present the new U.S. strategy toward Central Asia at a meeting of all five Central Asian foreign ministers. Uzbekistan was probably pleased that such a regional political meeting was held in Tashkent, rather than in the Kazakh capital Nursultan (formerly Astana), where Pompeo also visited. The US has paid little attention to Central Asia in recent years. The European Union is also struggling to establish relations with this geopolitically very important region.

Russia and China, on the other hand, consider Central Asia their “backyard” and are strengthening their influence there. Russia, given its long shared history, can be seen as the most likely partner. But in recent years, China, too, with its “One Belt and One Way” strategy and the development of Chinese influence in trade, infrastructure construction and technology, has become Russia’s strongest competitor in the economic field. In Uzbekistan, the Chinese presence is not yet as obvious as in Kyrgyzstan and Kazakhstan. Deputy Foreign Minister Nematov ignores our question whether China’s influence is of concern. Uzbekistan supports the One Belt and One Way initiative, he said, primarily because as a landlocked country it is interested in creating a variety of transport routes for its exports.

The dilemma with regard to Russia

Relations with Russia are no less delicate. Karimov in a peculiar way interpreted the “strategic partnership” with Moscow, as a result of which Uzbekistan first participated in Russian initiatives on economic and military integration, but then went back again.

Russia is now pushing Uzbekistan to join the Eurasian Economic Union. Kazakhstan and Kyrgyzstan have already become members of this organization, which is clearly dominated by Russian interests and attitudes. Uzbekistan has been hesitating. Ilkhom Nematov stresses that no country should put pressure on another to join this or that organisation. Uzbekistan’s interests are decisive.

What at first glance looks like a refusal is not really the case. Nematov also points to the benefits that membership can bring: Central Asia is an organism that functions when everyone works together, he said. Kazakhstan and Kyrgyzstan are members of an economic union. In addition, Russia is the main market for Uzbek exports, and Europeans are reluctant to receive goods from Uzbekistan. In general, Russia is very important, including because of the many predominantly young migrant workers who leave for Russia due to the lack of economic prospects in Uzbekistan. Nematov emphasizes that the only correct argument should be based on Uzbekistan’s economic interests. This issue has nothing to do with politics.

The danger of dependency is too great

But the economist Yulia Yusupova has a different view. He is one of the few independent experts in Tashkent where he advises international organisations and the government, although he is not afraid to criticize him harshly. Yusupov considers joining the Eurasian Economic Union dangerous strategically and thinks that the union is more of a political than an economic project. If Uzbekistan joins the union, it will bind itself to Russia because it has more influence in the organisation, he said.

But at the same time, Yusupov also sees several positive aspects in the membership: Russia, after China, is the country’s most important trade partner. In addition, the modern Uzbek customs service is worse established than the economic union. We should not forget about the benefits for migrant workers: it will be much easier for them to get a job in Russia.

The final decision has not yet been made. President Mirziyoyev confirmed in his address to the nation in late January that Uzbekistan is still weighing the advantages and disadvantages of joining the union. The country has to decide whether it will achieve its coveted key position in Central Asia by being a Russia-led Eurasian Union or by remaining an independent player.