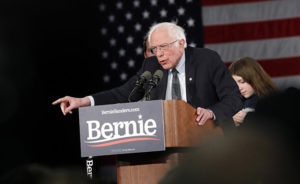 At the Trump faithful’s annual get-together, there was fresh fearmongering about Democrats in general and Bernie Sanders in particular

It came from abroad and infected America. It can spread from person to person and is potentially fatal. When symptoms emerge, it may already be too late.

The virus of socialism has broken out again, the biggest annual gathering of US conservatives was told this week, and it puts everything they hold dear at risk.

The leftwing ideology poses a bigger threat to the economy than the rampant coronavirus, Larry Kudlow, the economic adviser to Donald Trump, told the Conservative Political Action Conference (CPAC).

Claiming that “the Lord loves free enterprise”, Kudlow, who shared a stage with the president’s daughter Ivanka, added: “I don’t want to be snarky. I don’t even want to be political. We will have it out this year: America versus socialism.”

“America vs socialism” was the official theme of this year’s CPAC, a slogan stamped all over the convention centre. The agenda included sessions entitled “Socialism: Wrecker of Nations and Destroyer of Societies”, “Socialism and the Great Awokening” and “Prescription for Failure: The Ills of Socialised Medicine.”

Bernie Sanders actually acknowledges he’s a socialist. He’s far from the only one in the Senate, sadly enough

Before Trump’s speech on Saturday in an opulent ballroom, a parody SNN – “Socialist News Network” – studio was set up on the main stage for a routine that included mockery of Democrats and teenage climate activist Greta Thunberg. Host Jesse Kelly promised to be back to bring more news “from our studio to your breadline”.

As a framing of the upcoming election battle, it might also have been described as “the return of the red scare”. Seventy years after Republican senator Joseph McCarthy alleged that hundreds of communists had infiltrated the US government, launching a witch hunt that reached into the army and Hollywood, there was fresh fearmongering about Democrats in general and Bernie Sanders in particular.

CPAC organiser Matt Schlapp, chairman of the American Conservative Union, told attendees: “America versus socialism: it’s a very intended theme. Our view is it’s not capitalism versus socialism because socialism isn’t just about economics. Socialism, we believe, gets to the very core of violating the dignity of the individual human being that has God given rights. And that’s got us pretty fired up.”

Mike Lee, a Republican senator from Utah, said: “Socialism is as socialism does. One of the things that differentiates Bernie Sanders from others is that he actually acknowledges he’s a socialist. He’s far from the only one in the United States Senate, sadly enough.”

Lee added darkly: “They’re talking about having the government become your healthcare provider, your banker, your nanny, your watchdog. Having the government lie to you and spy on you and requiring the government to force you to work months out of every single year. In a word, the Democratic party has become the party of socialism. I don’t think we’re ready for that and I know you aren’t.”

Trump supporters wandering the corridors agreed that the perceived threat of socialism will be a motivating factor on election day. Many characterised it as big government promising something for nothing, raising taxes and curtailing freedoms. They pointed to examples of poverty in Cuba and Venezuela and tyranny in China and the Soviet Union.

Sanders can say he’s a ‘democratic socialist’ but that’s just an acronym for communist. It’s communism without a gun

Claude O’Donovan, 81, remembered listening to the McCarthy hearings on the radio.

“Communism was a muddy thing at the time,” he said. “He didn’t have the charisma to make the argument.”

Now he takes the Democrats’ shift to the left seriously.

“Today it’s a real threat. Bernie Sanders can say he’s a ‘democratic socialist’ but that’s just an acronym for communist. It’s communism without a gun. In this day and age, I would never have thought we’d have socialism become so dominant in the country.”

O’Donovan, from Aiken, South Carolina, turned up wearing a “Trump” cap and a Santa Claus costume – a hobby of his. “Santa gave things at Christmas to celebrate the birth of Jesus Christ. These people want us to give everything from cradle to grave and it can’t be done. We can’t print money.”

What if Sanders is elected?

“We would crash almost immediately. It would be disastrous.”

Asked the same question, Ronald Solomon, 60, a retailer of Trump merchandise from Las Vegas, replied: “The guy’s a certified nut and the world would be hurt. The last place to go for real freedom would be destroyed by a radical socialist. Any place they’ve decided to go down that road has resulted in a stagnating middle class, a collapse of business and people forced to break into zoos to feed themselves.”

Sanders’ brand of democratic socialism is more Scandinavian than Soviet, seeking to expand publicly funded education and healthcare and tackle inequality. He has been endorsed by Congresswoman Alexandria Ocasio-Cortez, 30, and dominates among young Democratic voters.

Victoria Spiotto, a 21-year-old student from Ashburn, Virginia, was having none of it.

“For me, socialism is a completely destructive ideology and system,” she said. “I think a lot of young people are ready for it but most Americans don’t trust it. You have people from Venezuela and Cuba who speak out about it and tell the truth of the situation.”

Numerous students were sporting T-shirts that said, “Kiss me, I’m a capitalist” coupled with images of shamrocks ahead of St Patrick’s Day. Among them was Salicia Bayes, 21, from Lansing in Michigan.

“I have a lot of friends from Venezuela and just hearing their stories is terrifying,” she said. “Even a lot of people in the Democratic party are not going to vote for Sanders.”

Others questioned how Sanders would pay for his ambitious reforms. Robert Douglas, 86, a neurologist from Pensacola, Florida wearing a “Keep America great” cap, said: “You can’t justify Medicare for all: it will cost $30tn. What about the green new deal? We’re talking about $60tn for that. JFK was the last moderate Democrat in my lifetime: he was not for big government.”

On Friday, British rightwing politician Nigel Farage urged attendees to donate to Sanders’ campaign, predicted that his nomination would guarantee victory for Trump and could enable Republicans to regain the House. Some agreed with that analysis. Shea Justice, 19, a student from Arlington, Massachusetts, said: “We’re calling it right now: Bernie Sanders is the next Jeremy Corbyn.”

Although Sanders made for an obvious and satisfying target, he was seen as symptomatic of a deeper shift in the Democratic party. A former New York police officer who goes by the name of Grizzly Joe said: “They’re all just different degrees of socialism, saying the same stuff in a different way. At least Bernie is honest about it.

“They want free this, free that. They’re telling their base, whoever that is – the morons that vote for them – that we’ll give you free stuff. It’s not physically possible.”

In a speech on Thursday, Vice-President Mike Pence summed up: “Today’s Democratic party has been taken over by radical leftists who want higher taxes, open borders and late-term abortion.

“There are no moderates in this Democratic field. Every other one of the Democrats running for president embraces Bernie’s democratic socialism.”

… we have a small favour to ask. More people, like you, are reading and supporting the Guardian’s independent, investigative journalism than ever before. And unlike many news organisations, we made the choice to keep our reporting open for all, regardless of where they live or what they can afford to pay.

The Guardian will engage with the most critical issues of our time – from the escalating climate emergency to widespread inequality to the influence of big tech on our lives. At a time when factual information is a necessity, we believe that each of us, around the world, deserves access to accurate reporting with integrity at its heart.

Our editorial independence means we set our own agenda and voice our own opinions. Guardian journalism is free from commercial and political bias and not influenced by billionaire owners or shareholders. This means we can give a voice to those less heard, explore where others turn away, and rigorously challenge those in power.

We hope you will consider supporting us today. We need your support to keep delivering quality journalism that’s open and independent. Every reader contribution, however big or small, is so valuable.

0
Bernie Sanders Democrats Republicans US elections 2020 2020-03-05
egoist
Previous: A new round of US sanctions against Russia could backfire
Next: «I’ve always been interested in Rasputin»
Subscribe
2 Comments
Oldest
Newest Most Voted
Inline Feedbacks
View all comments