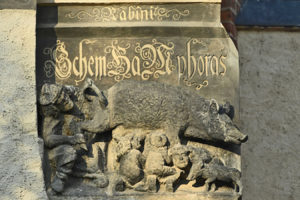 The higher regional court in Naumburg rejected the removal of the historic Reliefs “Kike” from the city Church in Wittenberg. That is a good thing. A Comment.

The best Argument for its defeat in court has provided the plaintiff himself. Michael Düllmann, once a Protestant theology student and then to Judaism converts, was quoted months ago in the Central German broadcasting as follows: “I was and I am appalled that the Church for centuries of anti-Semitism that has made Jew-hatred the part of their preaching, because that is at this Church.” At the time, Düllmann had failed before the district court of Dessau-Roßlau with his suggestion to remove the anti-Semitic “Jew” – Relief from the city Church in Wittenberg, and to bring to the Museum.

On Tuesday, he has lost prior to the next instance, the higher regional court in Naumburg. To him the Revision, however, remains still. Who is it that regards the plastic, it can Düllmanns horror parts: A Rabbi lifts the tail of a pig, and looks at the animal, which is considered in Judaism as unclean, from the rear. To the teats of the Pig men suck, apparently also Jews. The Relief from the late 13th century. Century, Martin Luther in the 16th century. Century in the city of Church sermons, sure to please, his anti-Semitic outbursts in favour of it.

There can be no doubt: The story of Church hatred of Jews “is this Church visible” as plaintiff Düllmann says. But that’s exactly why it is good, if the plastic remains. Also, the larger context speaks: The Relief is not the only subject of the debate on dealing with the historical evidences for all possible game types of enmity.

So the question is, whether from Astrid Lindgren’s “Pippi Longstocking”, the racist term “Negro king” should be removed for example, on a regular basis for heated argument. All the way, because “Kike” and “nigger king” are still contagious? Or have I not just as antidote to use, if your example about anti-Semitism and racism is solved? In the soil under the pig Relief of Wittenberg for more than 30 years, a commemorative plate, commemorating the murder of millions of Jews – if rather cryptic.

“Kike” in Wittenberg: “and Remove” be wiped away “self-deception”

There are tables and historical explanations. And the city of churches-community negotiations with Jewish organisations, an even clearer arrangement of the anti-Semitic plastic. Michael Düllmann had the most noble motives for his actions. But it is good that he has lost. “Wipe and Delete” is “self-deception”, says the historian Michael Wolff son. He’s right: Who makes history invisible, threatening to lose consciousness for you.

The Cologne CSD is to be held under a new Motto. “Unity! Right! Freedom!“ went back to the organizer. What makes the AfD? Trying to split. A Comment.