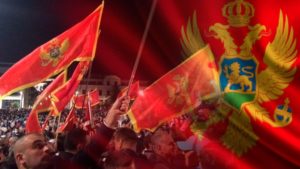 The background for the further escalation of the domestic situation is being formed in Montenegro. Balkan Insight associates the growing public discontent with the failure of the authorities, which are engaged in the Montenegrin identity strengthening, to fulfill a bunch of promises given to people. Particularly, the republican leadership is accused of unwillingness to really fight against abuses in the state bodies the web-source Vesti notes, drawing attention to the fact that a series of scandals, which greatly resonated with people last year, despite the expectations haven’t led to any officials’ retirements. The social policy of the government is also harshly criticized, Bloomberg points out. The measures taken in the framework of the promoted business assistance program obviously weren’t enough to make the economic situation better, RFI reports. According to the assessment of the IMF published by the BNE agency, the trend of the Montenegrin GDP growth’s stagnation is getting stable. In these conditions Večernje novosti considers the further decrease of the people’s well-being to be regular.

President Đukanović’s activity is considered by Montenegrin political expert Perich to be one of the key-factors of the instability. Being the leader of the ruling Democratic Party of Socialists (DPS) and counting on strengthening of its positions after the parliamentary elections scheduled for this October, he’s actively engaged into the campaign, which has virtually been started, the European Western Balkan notes. Willing to consolidate the DPS electorate the head of the state tries to play on the Montenegrins’ patriotic feelings, Spiegel states speaking of the adoption of a law on religious freedom. This law prescribes seizure of the land and property from the Serbian Orthodox Church. However, Đukanović’s activity had contrary outcomes. It triggered tension growth, which manifestation Reuters considers to be the recent large-scale protests. The president’s rash steps help the leading opposition force the Democratic Front (the DF), which tends to unite all regime opponents and make the demonstrations constant, the BBC states. The AFP believes this strategy is logic, taking into account that is merely possible to win without protest activity in conditions of a large-scale use of administrative resource by the government.

As Balkan Insight notes despite alarming signals Đukanović isn’t going to dramatize the situation. He’s about to tighten the screws for his enemies, thus Deutsche Welle comments the pretentious arrests of the opposition leaders and the independent media representatives. Also, according to professor Gartsevich from the Boston University, the authorities might rely on assistance from Washington and Brussels. The USA and the EU are afraid of seizing the political initiative by the opposition considered by them as Russian interests guide, the BNE notes. According to Večernje novosti, the West clearly lets to know that it’s ready to put a blind eye on democratic norms violation by the Montenegrin government. The European Western Balkan illustrates that with the statement of the European Commissioner for Neighborhood and Enlargement Várhelyi who called the republic to be ‘the leader of the European integration’.